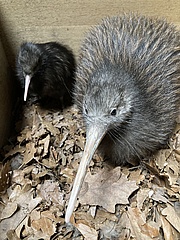 At last, some good news: Frankfurt Zoo is happy about a special anniversary. That's because the Kiwi chick hatched on March 30 - the second chick of the season - is something very special. It is an anniversary chick. Since 1978, 50 of the highly endangered New Zealand heraldic birds have seen the light of day at Frankfurt Zoo. That's a really happy anniversary. Fittingly, breeding and hatching this year were also exceptional.

Kiwi chick number 49 hatched, after a long incubation period of 85 days, on March 6. Unlike usual, it spent the first nine days together with its father HARI. In the past, it was common practice at Frankfurt Zoo to place kiwi eggs that were about to hatch in an incubator for safety reasons. The reason: occasionally it happened that young animals were accidentally injured or even killed by the adults during hatching. This should be avoided at all costs with these rare and valuable birds. Today, the great experience of the animal care team and strict monitoring of the hatching process make it possible to keep the incubating fathers and their offspring together.

The 50th chick was also born this natural way. On March 30, it hatched in the nest with the parent bird and was able to spend its first few days there. The sex of the two chicks is not yet known. This will only be determined after a few weeks via a feather sample in the laboratory.

Unfortunately, visitors will not get to see any of this. Because due to the pandemic, all animal houses in the zoo and thus also the Kiwi Information Centre must currently remain closed. Nevertheless, the renewed breeding success in Frankfurt is cause for celebration. Dr. Ina Hartwig, Head of the Department of Culture and Science, agrees: "The first kiwis came to Frankfurt in 1978 as a gift from the New Zealand government. Breeding this endangered and sensitive species is therefore both an honour and an obligation. We, and above all their keepers, can be proud of the fact that Frankfurt Zoo has been successfully breeding kiwis for over 40 years. This special expertise is also why the international conservation breeding program for the kiwi, which is run at the National Zoo in Washington, has entrusted our zoo with the coordination of the European population."

Zoo Director Dr. Miguel Casares is pleased with the move toward natural kiwi breeding, even if it comes with some risk: "Breeding kiwis requires a lot of time and care. Our kiwis are used to regular checks by the keepers. They don't let it upset them. This is very important, because from the 65th day of incubation, the kiwi eggs are taken out of the nest every two days and examined in order to be able to predict and monitor the critical time of hatching as accurately as possible. In this way, we can also keep a close eye on the behaviour of the adult bird and minimise any possible risks."