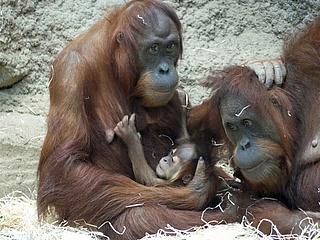 The reopening to the public is not the only good news to report from Frankfurt Zoo this week: Already on 09 February orangutan lady Indah had offspring. Today it was announced that the little male has been named Bukit. The name of Indah's firstborn is borrowed from the Bukit Tiga Puluh Conservation Program, which the Frankfurt Zoological Society (ZGF) maintains in Sumatra and which is supported by the zoo with donations from the voluntary conservation euro introduced on March 1.

Dr. Ina Hartwig, Head of Department for Culture and Science, is delighted about the offspring together with the zoo team: "Orangutans are a good example of how valuable the cooperation of zoos and conservation organisations is for the preservation of species. The little BUKIT represents the interlinking of Frankfurt Zoo with the project work of organisations such as the Frankfurt Zoological Society. Through the newly introduced Nature Conservation Euro, a voluntary donation with the purchase of a ticket, one hundred percent of which goes to nature conservation projects supported by the Frankfurt Zoo, zoo visitors are offered the opportunity to participate in large-scale nature conservation measures with a small contribution."

"Even a day before, the whole orangutan group was gathered around thirteen-year-old INDAH and very interested in her, indicating the upcoming birth," reports zoo director Dr. Miguel Casares. "Young INDAH is doing very well and taking excellent care of her little one. The experienced ROSA often stays close to her as if to support INDAH," Casares said. "At the Borgori Forest Ape House, all the cubs of a year are given names with the same first letter in alphabetical order, according to a zoo tradition. That way, you always know how old an animal is. This year, it's the letter "B"'s turn," Casares explains. "So it made sense to have the Bukit Tiga Puloh Conservation Programme on Sumatra as the inspiration for the name, where the ZGF runs, among other things, a jungle school to prepare orangutans for release into the wild. We are very pleased to be able to significantly support this excellent project with the Nature Conservation Euro."

The background is explained by Dr. Antje Müllner, Head of the South America and Southeast Asia Department of the ZGF: "The Sumatran orangutan is threatened with extinction. Above all, habitat loss endangers the primates, but also countless other species such as elephants, tigers and tapirs. In 2000, our project in Sumatra began with the aim of reintroducing confiscated orangutans, which had been illegally kept as pets, to the edge of the Bukit Tiga Puluh National Park in central Sumatra. Today, this project has become a comprehensive landscape conservation programme with many components. Over the last 20 years, more than 170 Sumatran orangutans have been reintroduced to Bukit Tiga Puluh and young animals are now regularly born in their natural habitat. Our goal is to build a viable orangutan population and conserve this habitat for the long term."

"Unfortunately, little BUKIT, Indonesian for hill, will only be viewable through the zoo's digital offerings on its website, Facebook and YouTube for some time to come. The Borgori Forest must remain closed due to the risk of infection for great apes with the corona virus, even though the zoo is now open again," Casares said.

For more information on the conservation euro, visit: https://www.zoo-frankfurt.de/naturschutz/naturschutz-euro