Frankfurt Zoo is pleased with offspring of okapis
from FFM Aktuell 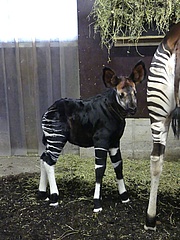 It is especially nice when good news can be announced from the zoo, which is closed to the public: There are once again offspring. This time with the okapis, which are classified as highly endangered. On 10 December, lady okapi Antonia gave birth to a young animal - presumably a female, as the coat pattern suggests. However, the little one would not be to be admired even if the zoo had already reopened. This is because okapi cubs are lazy animals, which means that they usually spend the first few weeks of their lives in hiding. In winter temperatures, this warm nest, which is hidden behind a curtain of leaves, is located in the barn. The young animal only leaves its place to drink with its mother. For 17-year-old Antonia it is already the third young animal. Father is the also 17-year-old okapi bull Ahadi.

"At Frankfurt Zoo, keeping and breeding okapis has a long tradition. Former Frankfurt zoo director Bernhard Grzimek brought the first okapi to Frankfurt in 1954. It was the first ever okapi in Germany. The beautiful forest giraffes are nevertheless not as familiar to many as their relatives living in the savannah. It is therefore all the more regrettable that the animals can hardly be seen in winter, as their stable is not accessible to visitors. I am pleased that this will change with the planned renovation of the zoo. According to the concept study ZOOKUNFT2030+, okapis will be shown together with other species from the Congo rainforest in a large Africa hall," says Ina Hartwig, Head of Department for Culture and Science.

Necessary for survival: Species conservation on the ground

In the rainforests of the Democratic Republic of Congo, where the okapi is native, it was the last African large animal species to be discovered as recently as 1901. Little is known about the behaviour of okapis - there are no reliable population figures, because the habitat is one of the most inaccessible and dangerous places in the world: for years the region has been politically unstable and repeatedly the scene of violent conflicts in which armed groups fight over mineral resources, among other things. All signs indicate that the okapi population has been in steady decline since the mid-1990s. It is currently thought that there are only a few thousand individuals left. Since 2013, the okapi has been listed as critically endangered (Endangered) on the World Conservation Union (IUCN) Red List. The main causes of the population decline are habitat loss due to human use, increasing population pressure and local demand for "bushmeat".

Zoo director Miguel Casares is delighted about the offspring, but at the same time stresses the urgent need to protect the outdoor population: "Our partner organisation, the Frankfurt Zoological Society, runs a conservation programme in the Lomami National Park in the DR Congo. The aim of the programme is to work with local partners to establish a functioning national park administration and to protect the flora and fauna of the ecosystem. Lomami is the youngest national park in the DR Congo. It was only established in 2016. To be able to protect the area effectively and sustainably, financial resources are needed especially for good equipment for park staff as well as for modern communication and monitoring technology."

Conserve and Learn: Species Conservation at the Zoo

However, as urgent as it is to protect the animals in their original habitat, it is also important, especially given the less than stable political situation, that zoos keep, breed and learn as much as possible about these species ex-situ, outside their habitat. For example, we know from observations that are only possible in zoos that apparently the fur markings on young animals give an indication of sex: If a white area of fur still blinks out between the tail and the striation of the legs, it can be assumed that it is a female - as was the case with Antonia's cub.

In 1960, Frankfurt Zoo succeeded in breeding the first German forest giraffe. To date, 25 okapis have been born at Frankfurt Zoo. Since 1985, the Antwerp Zoo has coordinated the European Conservation Breeding Program (EEP). Even today, the species is not common in zoos. currently, only 77 individuals are kept in about two dozen European zoos.

Worth knowing about okapis

.The okapi (Okapia Johnstoni) - also called short-necked or forest giraffe - is the smallest member of the giraffe family (Giraffidae), with a total height of 1.80 meters, compared to its relatives that can reach up to six meters. Its natural habitat is the tropical rainforest of the Democratic Republic of Congo. Okapis prefer dense undergrowth near bodies of water. They are diurnal solitary animals that forage for leaves and young shoots in the dim light of the forest. Their zebra-like striped hind legs are a special identifying feature. They provide perfect camouflage in the changing light and shade among the trees.

Protecting the flora and fauna of the Lomami ecosystem and establishing a functioning national park administration - this is what the Frankfurt Zoological Society, (ZGF) is working on together with local partners. Information on the conservation project is available at https://fzs.org/en/projects/lomami/