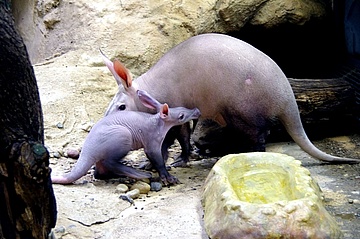 The very sad news that the popular aardvark ELVIS passed away on 10. July at the Frankfurt Zoo was followed only a few hours later by happy news: Elvis had still fathered offspring, who saw the light of day shortly after his death. In memory of her daddy, the little female aardvark was named MEMPHIS. The zoo is delighted with the significant breeding success in the species, which is rarely seen in German zoos.

To admit, the little aardvark baby does look a little curious: hairless and rosy with big strong feet and oversized shiny ears. Along with its long noses and extremely long tongue, it's perfectly equipped for a life underground, breaking into and preying on termite burrows.

Its home is the Grzimek House, with its large nighttime section. There are 46 exotic species on display in the Grzimek House. Griffin stingrays live here alongside pinnipeds, slender lorises and Komodo dragons. "Still the Grzimekhaus is one of the largest nocturnal animal houses in Europe and probably in the world. The aardvarks are very special representatives of the nocturnal zoo community: among today's mammals, they have no closer relatives," explains Dr. Ina Hartwig, head of culture.

At seven weeks old, the little female aardvark already weighs more than 7,000 grams. The ten-year-old mother ERMINE is doing everything right. They spent the first few weeks in the whelping box, and now it's time for the offspring to get to know the enclosure that the aardvarks share with spring hares and Senegal galagos. "It's no problem for the young animal to grow up without a father," explains curator Dr. Johannes Köhler, "aardvarks are solitary animals. The fathers play no role in the rearing of the young. It is not known how long the young of wild aardvarks are suckled. As in general some things concerning the species lie in the dark. Currently, the World Conservation Union IUCN does not provide any information on population trends. The aardvark (Orycteropus afer) is the only living representative of the order of the tube teeth and therefore takes a real special position among the mammals. The most important sensory organ is the nose, but the conspicuous bag-like ears are also well adapted to the orientation of the primitive animals at night. The zoo can look back on a long history of keeping aardvarks: With interruptions, the African savannah dwellers have been shown and successfully bred in Frankfurt since 1925. The last young animal LOTTE also gave birth to ERMINE in March 2012.

Aardvarks can only be seen in Germany in the zoos of Frankfurt, Berlin, Cologne and Saarbrücken. Their natural habitat is savannahs and open bush south of the Sahara