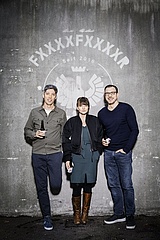 Big cheers for the team of FRANKFURTER BRAUUNION GmbH: they are among the six finalists of this year's Frankfurt Founders Award 2021. The start-up team led by Sven Weisbrich and Simon Horn will be invited to the Kaisersaal of Frankfurt's Römer on August 30, 2021 by the Frankfurt Economic Development Corporation, where the official closing event and award ceremony will take place.

The Frankfurt Founders' Prize is an initiative of the City of Frankfurt am Main and Wirtschaftsförderung Frankfurt GmbH, as well as the Frankfurt University of Applied Sciences. As a seal of quality, the Frankfurt Start-Up Prize is intended to generate an entrepreneurial spirit of optimism in the city, for the city, and is accompanied accordingly by the media and broadcast live. The prize is endowed with a total of 30,000 euros and has been awarded annually since 2001 to founders from the Frankfurt city area who strengthen the business location Frankfurt am Main with their business idea, have a solid business plan and show a special commitment and creativity.

"We are proud to be among the top 6 applicants for the Frankfurt Founders Award 2021. We were able to convince with our concept to establish a new beer brand in Frankfurt am Main and at the same time to stand up for diversity and tolerance in the city through various campaigns", Sven Weisbrich, co-founder and managing director of FRANKFURTER BRAUUNION GmbH, is pleased. "The nomination by an independent jury of start-up and business experts, politicians and selected award winners from previous years confirms our intention. It creates a public stage for our intention to create a more colorful togetherness in the city, which sets new accents, promotes creativity and thus also new entrepreneurship," says co-founder Simon Horn.

"We and the other finalists take responsibility for people and our city every day without being asked and go to work with entrepreneurial courage and a lot of creativity and passion. This is exactly what is tested and honoured at the Frankfurt Founder's Award. In this respect, we already feel very honored to be in the final at the end of August," adds Sven Weisbrich.

FRANKFURTER BRAUUNION GmbH, based in Frankfurt's Ostend district, was founded in early 2020 by entrepreneurs Simon Horn, Stefan Lucht, Raffaela Schöbel and Sven Weisbrich in Frankfurt am Main. With their professional backgrounds in gastronomy, finance, real estate and marketing, they have set themselves the common goal of establishing a new and high-quality beer brand in Frankfurt am Main. Through creative campaigns and quality products that bring with them a high level of regional identification, as many people as possible are to be addressed and brought into an overall social exchange. Reservations are to be dissolved and commonalities discovered so that something new can emerge throughout the city. For this purpose, the founders developed their two main products FXXXXFXXXXR HELLES and FXXXXFXXXXR RADLER alcohol-free in close cooperation with a traditional Franconian brewery and according to the purity law of 1516.

All FRANKFURTER BRAUUNION products and merchandising items can also be purchased directly via the online shop https://www.wegbierkiosk.de/ as well as in stationary Wegbierkiosks of the same name in Frankfurt am Main. One of these is located directly at the company's headquarters on Danziger Platz and another has recently opened in the city centre. Further way beer kiosks are to follow in the entire city area and later also nationwide. Additional vertical as well as horizontal cooperations with suitable beverage producers, which meaningfully complement the overall brand experience, are also being planned.

The FRANKFURTER BRAUUNION also generates additional nationwide attention each year between June and July with its special edition FXXXXFXXXXR BUNTES. During this time, the FXXXXFXXXXR HELLES is relabelled in rainbow colours so that colourful signs are set in as many German towns and cities as possible. Together with changing charitable initiatives, FRANKFURTER BRAUUNION will then campaign for social issues and against discrimination in a particularly visible and targeted manner. One hundred percent of the profits during the campaign periods go to the work of the respective campaign partners.