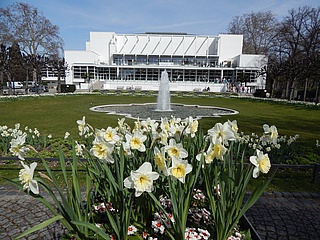 The current situation is really tricky: On the one hand, many people are aware that we have to continue to be cautious and stay in lockdown due to the unfortunately increasing numbers of infections again and the spreading mutants. On the other hand, the damage to commerce, restaurants, cultural sites is getting worse. In addition one can observe straight with beautiful weather that fewer and fewer people adhere to the Corona measures. On the one hand, there are problems with vaccination, on the other hand, incomprehensible rules are being issued. When today, Wednesday, the federal government and the states discuss how to proceed, the difficult task will be to find a good and, above all, for the people comprehensible way.

Because it needs not only restrictions, but also perspectives. And that is exactly what Frankfurt's Lord Mayor Peter Feldmann is talking about in the "Frankfurt Declaration", which he adopted after intensive talks with the DEHOGA hotel and restaurant association, the city management and the Hessen-Süd trade association. "We want to look ahead," says the city leader. "But with a sense of proportion. The infection figures are still high. At the same time, the vaccination campaign and the availability of rapid tests, probably from 8 March, open up new opportunities for the catering trade, hotel industry, retail trade - and beyond that for our schools and daycare centres. Here we are on the word of parents to return to a regular schedule as soon as possible. In addition, I would like to see that in Frankfurt not only outdoor gastronomy is allowed to open from April, but also the zoo, palm garden and botanical garden."

These are - at least on paper - positive prospects. Strolling through the Palmengarten in bright sunshine, being able to visit the animals in the zoo or enjoying the idyll in the Botanical Garden - that would also do good for the souls of many Frankfurt residents who are plagued by the winter lockdown. And that's exactly what we need - and could have if, for all the joy of sunshine and blooming flowers, we don't disregard the important AHA rules. But of course there is much more at stake. It is about numerous threatened livelihoods that need perspectives quite urgently.

"The industry is no longer willing to go along with the lockdown measures without a real perspective," James Ardinast and Robert Mangold from the Hotel and Restaurant Association of Hesse, Frankfurt District Association, emphasized.

"Click & Meet" is only a long overdue first step, said Joachim Stoll and Felix Pfüller, representatives of the Hesse-South trade association. Their demand: "The trade urgently needs the announced transparent, binding and evidence-based opening strategy with concrete measures." Because only with "Click & Meet" the problems of the retail trade will not be solved, as this can hardly generate sales.

Here now the "Frankfurt Declaration" in the wording:

Frankfurt Declaration on Opening Perspectives for Gastronomy, Hotels and Retail

The City of Frankfurt am Main, the Frankfurt District Association of the Hotel -and Gastronomy Association DEHOGA Hessen e. V. and the Hessen-Süd trade association welcome the Hessian state government's push to open up retail outlets to fixed consultation appointments ("Click & Meet") and to allow restaurants, pubs and cafés to operate outside from April 2021.

We are very concerned about the future of these industries. Retail, gastronomy and the hotel industry secure tens of thousands of livelihoods in Frankfurt am Main. They enrich our city with their diversity. And: the shop or pub around the corner is a cultural asset and quality of life. Against this backdrop, we would like to see a broad-based discussion on the extent to which the availability of rapid tests in combination with the ongoing vaccination campaign might not justify further opening steps. For example, a negative rapid test result could become an entry requirement for hotels for non-business overnight stays.

Furthermore, we advocate exploring the transfer of the planned relaxations to other areas. For example, many eating establishments have large, floor-to-ceiling window fronts that can be opened wide for use as porch areas as part of outdoor dining. Retailers could be allowed to sell their products outdoors in the same way as outside catering, possibly also in the veranda area if space permits.