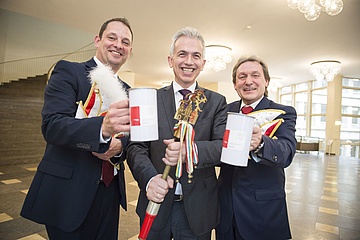 Grand Campaign Opening on 11.11. at the Hauptwache

(kus) Preparations for the 2017/2018 carnival campaign are in full swing. The events of the Grand Council and its affiliated carnival clubs will bring many a diversion to the citizens' districts. Many innovations have been worked out by those responsible for the Grand Council in recent weeks and months to make Frankfurt's carnival even more attractive.

For example, on 11.11. for the opening of the campaign, all Frankfurt residents and of course guests of the city are invited to come to the Hauptwache. In the heart of Frankfurt, the 2017/2018 campaign will be opened for the first time on an open-air stage with a carnival programme.

Lord Mayor Peter Feldmann announced this year's motto: "Frankfurt's Leut' e' Freud' zu machen, bringt unser Narrenherz zum lache", and elaborated: "This time the motto is entirely dedicated to our beautiful city and its people. Many lament the decay of our society, but for me Shrovetide is a part of our tradition, of voluntary work and sociability and serves the people of the city. The clubs do an indispensable job and stand for the cohesion of our hometown." He thanked the Grand Council and its president Axel Heilmann for the great program.

This was presented in the press conference - from the enthronement of the prince and princess, the Rosa Cloudchen sessions, dance tournaments, children and youth sessions, to the children's carnival procession and the storming of the town hall.

Due to increased costs for security during the big carnival parade through downtown on Sunday, Feb. 11, there will be a fundraiser. Starting as early as 11.11, the Frankfurt Fassnachter will be out and about with an appropriately designed collection box. Part of the proceeds will be donated to the reconstruction of the Goethe Tower.

New is the VGF-Fastnacht tram which promotes the great days and the clubs. This will be presented at the opening of the campaign on 11.11. and will be put into operation by the Lord Mayor himself.

A prince and princess and a children's prince and princess already exist, of course, but the public will only find out their names at the opening of the campaign at the Hauptwache on 11.11. Council President Heilmann is already looking forward to this: "Fassnacht is not everything, but without Fassnacht everything is nothing. I'm looking forward to this year's campaign."

For the complete Carnival program, visit