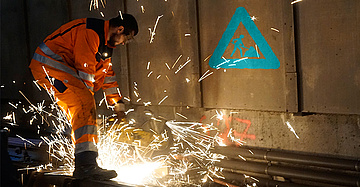 Yay, just a few more days and it's finally summer holidays. Unfortunately, not everyone is likely to be happy about the holiday season again this year, as once again many commuters will find it difficult to get to work during the six weeks of vacation. While in previous years it was the S-Bahn tunnel that tested the patience of many passengers, this summer it will be the Frankfurt subway: For six weeks, the route of the subway lines U1, U2, U3 and U8 from Südbahnhof to north of Heddernheim will be closed in order to carry out various works on the highly frequented line. Up to 120,000 passengers use this route daily.

For those who do not have the opportunity to switch to a bicycle, there is a rail replacement service (SEV) with buses during the time of the closure, which runs largely parallel to the subway route. The municipal public transport company traffiQ and the VGF have attached great importance to a good range of wide-ranging diversions in order to offer passengers as many individual options as possible in Frankfurt's dense public transport network. This also fulfils requests from the local councils and the Passenger Advisory Board.

One focus is on the connection from the north of Frankfurt with the U9 line to Ginnheim and onwards with tram line 16, but bus lines 27 from Bonames to Preungesheim and 64 from Ginnheim along the Westend university campus to the main station also improve the service. Customers with travel authorization for the Frankfurt am Main tariff area can also use the subway between Niederursel and Oberursel Bahnhof as well as the S-Bahn line S5 between Oberursel Bahnhof and Frankfurt.

So there are plenty of ways to still get into the city center (or out again). However, you should plan for longer travel times and find out exactly what your possible connection is before you start your journey. The timetable information at http://rmv-frankfurt.de takes the changed timetables into account. Information on the best travel option can also be obtained from the RMV service telephone on 069/24248024, which is available around the clock. The use of these offers is highly recommended, as they always select the best connection, which is often not present as a passenger in everyday life. More information can also be found at http://vgf-ffm.de/wirbauen.

So, from Monday, July 1, circa 2 a.m., to Monday, August 12, circa 3 a.m., the U2 line will only run between Nieder-Eschbach and Riedwiese/Mertonviertel. The U3 line will travel from Oberursel-Hohemark to Wiesenau station and from there on to Ginnheim. The U9 line will be extended beyond Nieder-Eschbach to Gonzenheim. It will run at denser intervals and with more carriages, so that together with tram line 16 it will become a strong connection from the north of Frankfurt towards the city centre.

The VGF will use rail replacement service with buses on two routes. The SEV stops are located near the subway stations and are signposted.

The so-called SEV1 runs every five minutes from Konstablerwache via Eschenheimer Tor, Eschersheimer Landstraße and Heddernheim to Heddernheimer Landstraße, where it is possible to change to the U3 and U9 lines. Two articulated buses are on the road at the same time per departure on weekdays during the day.

Although it is of course tempting to cycle parts of the route in summer, VGF and traffiQ ask that you refrain from taking bicycles on the SEV buses, so that the already limited space is not reduced even more. A good alternative here are rental bicycles: the VGF provides these: Up to two trips &agrave; 30 minutes are possible with the bikes daily free of charge. Detailed information on this can be found at the stops.

From the north of Frankfurt to the city

.Without question, the most attractive way to get around the closed area is to take the U9 subway line to Ginnheim and from there continue with tram line 16 to Bockenheimer Warte (subway lines U4, U6, U7), to Westbahnhof (suburban trains) or to Hauptbahnhof (main station). Bus line 64 also runs between Ginnheim and the main station, which is also of interest to students at the Westend university campus - the semester break does not begin until the second half of July. Line 27 takes you from Nieder-Eschbach and Bonames to the Frankfurter Berg (S-Bahn line S6) and to Preungesheim (U5). On all lines, the service will be increased, the U5 line will run according to the denser timetable that applies during school hours. From Oberursel, Bad-Homburg, Eschersheim and from Frankfurter Berg, the S-Bahns run as usual to Frankfurt city centre.

From Saturday, June 29, circa 4 a.m., to Monday, July 1, circa 2 a.m., there will be no service on the U1, U2, and U8 lines between Südbahnhof and Willy-Brandt-Platz due to work in the tunnel. The U3 line will only run between Oberursel-Hohemark and Heddernheim.

What is being done?

Now, of course, the question arises: why all the fuss? It's simple: on the so-called A line, VGF will bundle various works during the summer holidays to make good use of the several-week closure of its most used section. This includes replacing tracks and switches, refurbishing catenary poles, renewing cable strands and building four new crossings.

Whoever thought that this major construction site was all there was, was mistaken: Because in addition to the closure of the A line of the subway route, the VGF must also take the eastern section of the subway lines U4 and U7 to Enkheim out of service during the summer holidays. The reason for this is work for the Riederwald tunnel by HessenMobil. VGF will provide buses as rail replacement services (SEV) between the Schäfflestraße and Enkheim underground stations from 29 June to 11 August 2019. In the first three weeks of the summer holidays, the U7 can run to Schäfflestraße, in the last three weeks, the U4 will take over.

While the SEV buses between Schäfflestraße and Enkheim will be in operation for the entire summer holidays, the U-Bahn lines will run differently:

Again, please inform before starting your journey and plan for longer travel times

The municipal public transport company traffiQ and the VGF recommend their passengers to plan for longer travel times and to use parallel connections in addition to the SEV buses. Passengers coming from Bergen can take bus line 43 in the direction of Bornheim Mitte with a connection to the U4 at Seckbacher Landstraße. From Fechenheim Nord, the regional train or the tram from Mainkur Bahnhof can be an alternative.

Passengers from Frankfurt city center towards Enkheim are asked to change to the "right" subway line to Schäfflestraße already at Konstablerwache. The timetable information (rmv-frankfurt.de) takes the changed timetables into account. The RMV service phone at 069 / 24 24 80 24, which is available around the clock, also provides information about the best travel option.

Although the reason for the closure is work by HessenMobil in connection with the Riederwald tunnel, VGF will also use the closure for its own work on tracks and crossings.

The VGF will carry out work in the track area of the Heddernheim depot and in the adjoining section of track up to Maybachbrücke from July 1 to August 11. Work will be carried out here Monday to Friday from 6 a.m. to 10 p.m.

In principle, Eschersheimer Landstrasse will remain passable, but between July 1 and 29 there will be a shift in lanes around the subway ramp north of Miquel-/Adickesallee and the elimination of some parking spaces. All lots, however, can be accessed.