Frankfurt's Christmas tree has a star
from FFM Aktuell 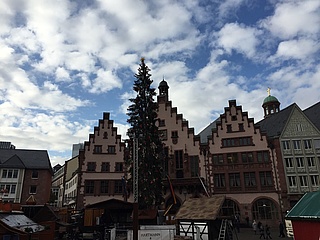 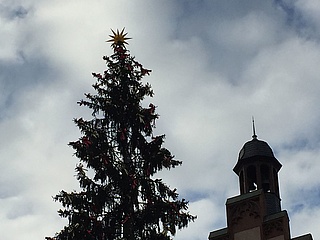 When this year's Christmas tree was put up on Römerberg a few weeks ago, the question was also discussed at the press briefing as to why the tree would not be decorated with baubles and a star on top. The answer was obvious: it was primarily for safety reasons. The danger is too great that such tree decorations could fall down if the wind is too strong. That is why the city decided against it again this year. Nevertheless, one heard from the citizens again and again that especially a star on the top would be really beautiful and would enhance the tree. And those responsible seem to have taken this wish very much to heart. Because after intensive planning, the Frankfurt Christmas tree now also has a star.

A stable metal frame was attached to the top, on which the star with its 1.30 meters in diameter was then screwed down. This ensures that the plastic star cannot fall down. The special highlight: When the lights on the tree are switched on for the opening on 25 November, the star will also sparkle magnificently. So the "Ohhhhs" and "Aaahhhhs" will be even louder this year than in previous years.

The official opening will take place at 5 p.m. Monday, Nov. 25. In addition to the traditional opening speech by the mayor and a greeting by Roland Weiß, the mayor of Bad Orb, there will also be a Christmas concert by singer Dana Winner after the illumination of the tree. If you want to get into the festive mood, you should mark this date in your calendar!