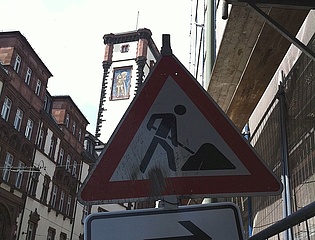 New asphalt, new paving or new sidewalks - the work never runs out for the department with the dense traffic route network. Klaus Oesterling, head of the traffic department of the city of Frankfurt am Main, and graduate engineer Michaela Kraft, head of the Office for Road Construction and Development (ASE), informed in a press conference today (Wednesday) about the planned construction sites.

"It is a good idea to use the summer time. It is quieter on the roads and there is no school traffic," explained Councillor Oesterling. Office Manager Michaela Kraft added: "These are the best conditions for us to build quickly in many places at the same time." Instead of the usual 475,000 commuters in and out, there are significantly fewer on the road.

The ASE is building at a total of around 25 different locations in the Frankfurt urban area during the summer. Among them: the deconstruction of the junction of the A 661 Bonames and the construction of a new cycle path in the industrial park "Am Martinszehnten". But maintenance measures such as those in "Steinbacher Hohl" or "Beselerstraße" are also on the agenda. There is no summer break on Frankfurt's bridges either: the bridge over Rosa-Luxemburg-Strasse is getting a new carriageway, a cycle path and footpaths. And the pedestrian bridge on Ernst-Kahn-Strasse is being renovated.

An overview for better planning to avoid and - if possible - bypass the affected areas can be found HERE:

Alte Fahrt (basic renewal of the roadway and sidewalks)

Am Martinszehnten (new construction of a cycle path)

In addition, the reconstruction of bus stops throughout the city is progressing steadily. Among other things, passengers can look forward to barrier-free entry and exit.