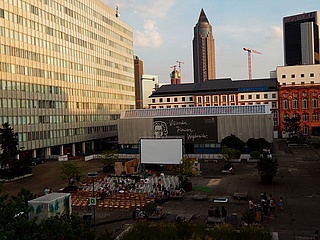 After it was unclear for a long time whether the popular open-air cinema would be back this year, the LICHTER team, together with Daniel Brettschneider, has succeeded in getting an open-air cinema in Frankfurt off the ground for the fifth time. In previous years, what was special about this open-air cinema was not necessarily the films that were shown, but the venues. Places were chosen that will no longer exist in this form in the future. Last year it was in the skyscraper canyons where the FOUR is currently being built. Before that, it was the inner courtyard of the former Volkstheater, where the Romantic Museum is currently being built. The location of the fifth open-air cinema will also look nothing like it does now in the near future: The university campus at Bockenheimer Warte. After the university has moved more and more parts to the Westend in the past years, the Senckenberg Museum will expand in this area in the future.

This will of course also change the former campus. The organizers are happy that they were able to win this special place for many Frankfurters for their open air cinema - a place with history: after all, students with hot heads listened to Horkheimer's and Adorno's lectures here more than 50 years ago. Between the "Neue Mensa" and the Labsaal built by Ferdinand Kramer, the Frankfurt Open Air Cinema will be showing cinematic highlights of recent months on 18 evenings from 27 July to 25 August. The campus at Bockenheimer Warte, once a gathering place for many protest movements and a casual hangout for generations of students, will be a central hub for open-air lovers for four weeks this summer.

The acclaimed drama "Out of Nowhere" is the opening film, while other cinematic treats range from "303" starring Frankfurt actress Mala Emde, "Call Me by Your Name" with US star Timoth&eacute;e Chalamet to film classics such as Stanley Kubrick's science fiction epic "2001: A Space Odyssey," which made film history exactly 50 years ago. The cult film "The Big Lebowski" celebrates its 20th anniversary this year. A reason to show it at the end. As always, all films can be seen in their original version with German subtitles.

The Bockenheim campus is very easy to reach by public transport. It is located in the immediate vicinity of the underground station "Bockenheimer Warte/Universität".

The box office and admission are located between Bockenheimer Warte and the university campus. The entrance to the courtyard opens at 8 pm. The film starts when it is sufficiently dark. Tickets are available for 10 Euro, students pay 7,50 Euro. As always, Chez Vivi will provide culinary delights with their Cr&ecirc;pes and galettes. Cold drinks of all kinds will also be available.

More info can be found at: Www.freiluftkinofrankfurt.de

as well as at: www.facebook.de/freiluftkinofrankfurt

No advance booking and no reservations possible

If rain continues, the screening is cancelled and will be repeated in due course