Freiluftkino Frankfurt starts into the fourth season
from FFM Aktuell 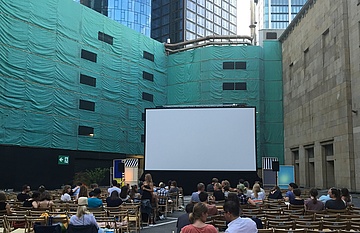 Summer: That usually means high temperatures, bright sunshine and good mood. Of course, you don't like to sit in dark rooms. No, in summer people are driven outdoors. While the theatres keep their doors closed for the summer break, the live programme in clubs and concert halls shrinks to a very manageable minimum and cinema operators complain about empty halls, the cultural events in many places in the city simply shift outside. There is open-air theatre in Grüneburgpark, music and cabaret at "Stoffel" in Günthersburgpark, the Tangente Festival on the banks of the Main or the Sommerwerft with theatre, music and parties at Weseler Werft. But what Frankfurt has long lacked in this colourful summer programme is a genuine open-air cinema. There are smaller open-air festivals and special events, such as the "Shorts at Moonlight" in Höchst or the summer cinema in the garden of the Städel Museum. But anyone who wanted to experience regular cinema enjoyment under the open sky in the middle of the city centre searched in vain until a few years ago.

That didn't change until 2014, when Johanna Süß and Gregor Maria Schubert, organisers of the LICHTER Film Festival, teamed up with open-air cinema veteran Daniel Brettschneider, founder of Offenbach's Hafenkino, to finally give Frankfurt an outdoor cinema. After two successful summers in the Cantate Hall and a guest appearance in the Gallus, the open-air cinema is coming back in 2017 - and once again to a very special location! From 06 July to 29 July 2017, the event series will take place at a location that has so far remained hidden from most Frankfurt residents: on the site of the future high-rise quarter FOUR (former Deutsche Bank site), in the middle of the city centre, there will be cinematic treats to watch - from the Oscar winner "Moonlight" to Jim Jarmusch's latest stroke of genius "Paterson" to the indie hit "Captain Fantastic - Einmal Wildnis und zurück". This fourth edition of the open-air cinema with this previously not publicly-accessible area in the middle of the skyline will therefore be even more spectacular than the first three open-air cinemas.

Before the inner courtyard of the former Deutsche Bank property is demolished at the end of 2017, the Frankfurt open-air cinema gets the unique opportunity to put up a screen at this location in the heart of the city and throw film fantasies into the night sky in pristine surroundings. A place that is ideally created to unite love of film and love of the city of Frankfurt. There really is a very special atmosphere here, where you can start your evening off relaxed and experience very special film enjoyment.

From 6 July, the film gems of the past cinema months can be seen every Thursday, Friday and Saturday. The indie hit Captain Fantastic - Einmal Wildnis und zurück (Once in the Wilderness and Back) with Viggo Mortensen as the father of a dropout family will kick things off. Great acting then follows in Paul Verhoeven's new film: in Elle, the outstanding Isabelle Huppert plays a woman who doesn't let anything or anyone get her down. The programme continues with an idiosyncratic portrait of America by Jim Jarmusch: Adam Driver as Paterson discovers the beauty of life in the daily monotony. Another programme highlight is this year's audience award winner of the LICHTER Film Festival: In Ghostland, directors Simon Stadler and Catenia Lermer accompany the indigenous people of Namibia on a journey into another world of life - all the way to Frankfurt am Main.

The former Deutsche Bank site is located between Grosse Gallusstraße, Junghofstraße and Neue Schlesingergasse. The Roßmarkt is less than 100 meters away. Box office and admission are at Gallusstraße 10-14, access to the courtyard opens at 7pm, the film starts when it is sufficiently dark. Tickets are available at a price of 9 euros. For culinary delights provides as always Chez Vivi with their Cr&ecirc;pes and galettes. Cold drinks of all kinds will also be available.

No advance booking and no reservations possible

In case of persistent rain the screening will be cancelled