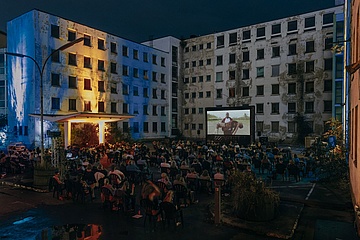 Cinema under the open sky is always something special. But when first-class films are shown in very special places in the middle of the city, then it is unique. The concept of the Freiluftkino Frankfurt has proven itself eight times so far. A very diverse selection of films is shown, ranging from crowd-pleasers to absolute insiders' tips, in unusual off-locations. Here, a very special big city atmosphere prevails, which intensifies the cinema experience even more. Previous locations of the Freiluftkino Frankfurt were, for example, the former Deutsche Bank area in the city center, the Bockenheim campus, the inner courtyard of the former Cantate hall or the terrace of Le Panther. The last two editions took place at a particularly exciting location, to which the open-air cinema will also return in 2022: The courtyard of the Old Police Headquarters near Frankfurt's main train station.

Here cinema fans can end the day with a delicious galette and a refreshing long drink when the Frankfurt open-air cinemapresents its now ninth season from June 30 to August 21 . On the evenings from Thursday to Sunday, current cinema highlights will then be shown first and foremost. Ridley Scott's "House of Gucci" with a great Lady Gaga is part of the program as well as "Parallel Mothers" (Madres paralelas), the latest feature film by Pedro Amodóvar starring Penélope Cruz and Milena Smit. Also screened: "Rabiye Kurnaz vs. George W. Bush ", "Licorice Pizza", "Spencer", "Red Rocket", "Where the Sun Rises in Paris", "The Card Counter" and "The Father". As in previous years, the program will feature current world cinema as well as some cinema classics. As part of the celebrations for the 30th anniversary of Christopher Street Day, there will be two special screenings with the films "Große Freiheit" on July 7 and "Portrait of a Young Woman on Fire" on July 8. Already one week before the official open air cinema starts, the LICHTER Filmkultur e.V. organizes a special program on the same area within the framework of the Fashion Week: the Fashion Week Open Air Cinema. On Friday, June 24, the "Skate Video Night" will take place in cooperation with the skateboard culture festival SKTWK: Various skate videographers from Germany and Europe show their latest projects to a partly from far traveled scene audience.

With a musical accompanying program, cold drinks at the open-air cinema bar and culinary delicacies from Brittany by Chez Vivi, the open-air cinema Frankfurt is more than cinema: it is a place that invites you to linger - for an all-round successful summer evening.

The Old Police Headquarters between the main station and the exhibition grounds has been largely empty since 2002. 20 years are that now, in which time has left its mark and created an off-location, which gives the open-air cinema a very special charm.

The entrance to the open-air cinema Frankfurt in the Old Police Headquarters (address: Ludwigstraße 18, 60327 Frankfurt am Main) is located only three minutes walk from the Messe Frankfurt. Tickets are available for €10.00 per person in advance at www.freiluftkinofrankfurt.de. Admission is at 7:30 p.m., film starts when darkness is sufficient.

You can find the complete film program at www.freiluftkinofrankfurt.de

In case of persistent rain or thunderstorms, the performance must unfortunately be canceled and will be repeated in a timely manner. Up-to-date information is available on Facebook www.facebook.de/freiluftkinofrankfurt, Instagram www.instagram.com/freiluftkino.frankfurt and at www.freiluftkinofrankfurt.de