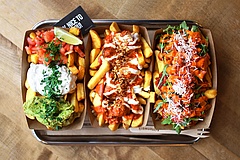 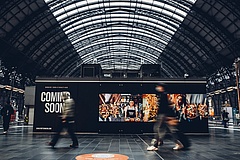 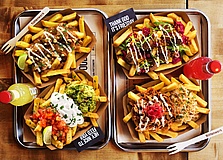 Next stop: fry heaven! Yes, if you like particularly tasty fries, there's a new stop for you: Frankfurt Central Station. Here, in the pavilion in front of platform 18, where some time ago fish specialities from TV chef Steffen Henssler were served in the AHOI, the now 22nd french fries factory of the Düsseldorf family business "Frittenwerk" will open in a few weeks. It is the second branch in Frankfurt after the restaurant on Kaiserstraße, which is only a few meters away. Due to its location, it is intended to spoil commuters and travellers in particular with frites, salads and co. - either to go, or - as soon as that is possible again - in the leafy dining room, shielded from the hustle and bustle of the station.

Naturally, poutine, the delightfully delicious national dish from Canada, will also be the centerpiece of the menu at this branch. For those who are not yet familiar with this variety of fries, this "mess" - the free translation of the name from French - is briefly introduced: Instead of a ketchup or mayo, fries here are garnished with exciting toppings and sauces. In addition to the Canadian classic - fries with gravy and melting cheese - the menu also includes fiery chili cheese fries, fresh guacamole, and spicy pulled pork or shawarma. Our favorite is the Pulled Pork variant - but of course the other Poutines are also really delicious!

Whether small or large hunger - at the Frittenwerk in the main station all french fries lovers should get their money's worth: So there is a classic portion of fries already from 3.50 euros. The poutines, on the other hand, are a genuine main course and leave no stomach rumbling for between 6 and 8 euros. If you prefer the classic, you can also get curry sausage fries here. Seasonal dishes also freshen up the menu again and again. Thanks to the "fast casual" concept, every guest has his or her bowl of fries in hand in no time.

At this new location, the Frittenwerk could win many new fans. After all, Frankfurt's main train station is Germany's second busiest station, with 500,000 travelers a day. And there are likely to be many commuters and travellers waiting for their train with growling stomachs. In addition, the Frittenwerk also has delicious offerings for vegetarians and vegans. In the Germany-wide ranking of vegan-friendly restaurant chains by nutrition organization ProVeg, the Frittenwerk came in a strong fourth in December 2020. The travel portal Big Seven Travel even voted the Frittenwerk among the 50 best vegan restaurants in Europe. Although the Frittenwerk is not a purely vegan restaurant, the basic vegan-friendly orientation convinces guests and experts. Today, about 70 percent of all orders are vegetarian or vegan, and the trend is rising. The offer is continuously extended and refined. Likewise, the Frittenwerk exemplifies an environmentally conscious and sustainable dining culture, be it with the renunciation of plastic or the biodegradable packaging, bags and cutlery.

In the new Frittenwerk at platform 18, there will be space for around 50 guests in and in front of the restaurant. So whether you're in a hurry or want to treat yourself to a little tasty downtime, this is definitely the place to be.

When exactly Frankfurt's second Frittenwerk will open will be announced shortly. The target is an opening at the end of March.