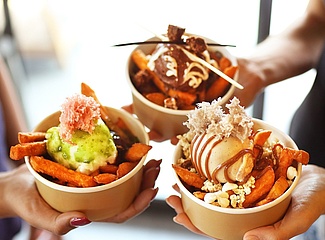 The big heat wave may be over, but the summer is far from over. After the great success in Cologne and Düsseldorf, Frittenwerk Frankfurt is now also introducing a new summer trend just in time for the Bahnhofsviertel night, which at first sounds like something that takes a lot of getting used to: fries with ice cream! Fries with ice cream? You heard right. From Thursday, 16 August, warm sweet potato fries will be combined with heavenly creamy ice cream from Patisserie Walter in Kleinheubach at the Frittenwerk at the main station. In close cooperation, three refreshing desserts were created together to combat the summer heat and dessert cravings. The crispy sweet potato fritters form the basis, followed by a large ice cream scoop and all kinds of delicious toppings. Choices include a light lemon sorbet with sweet basil pesto, vanilla ice cream with salty caramel sauce and chocolate ice cream with white chocolate sauce. Garnishes for the dessert cups include cherry ragout, oat crumble or brownies.

The Frittenwerk has found the perfect partner for the dessert adventure in Patisserie Walter. The patisserie regularly caters to a large number of clients, including luxury hotels and Michelin-starred restaurants. The quality of the desserts is paramount, which is why only first-class and natural ingredients are used. All varieties are made fresh and according to our own house recipe, without any industrial additives. Frit fans in Cologne and Essen have already been able to try their way through the desserts for several weeks. And since the response has been so loud and overwhelmingly positive, the Frittenwerk is now following suit in Frankfurt. The Ice Fries are the first dessert ever to find its way onto the Frittenwerk menu.

Read more about the Frittenwerk HERE