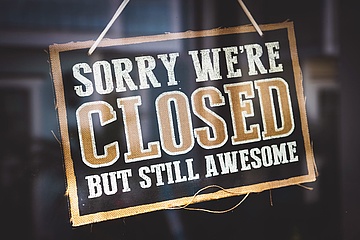 We were all so hoping we wouldn't have to hear this news again. But the rising infection figures across Germany have prompted the federal and state governments to once again pass tough contact restrictions, which particularly hit businesses and institutions that have distinguished themselves in recent months with exemplary hygiene concepts. Nevertheless, it is now again restaurants and cultural venues that are being closed in order to limit the incidence of infection.

The pandemic situation also remains tense in Frankfurt! With a seven-day incidence of 218.8, the city continues to be well above the Hesse-wide average of 137. The administrative staff has therefore decided to extend the general order that expires on October 31. This means that masks will continue to be compulsory in the entire city centre from the Alleenring area onwards. The regulations on alcohol consumption in public places will also remain in place.

Analogous to the planned state law regulations, the administrative staff is aiming for these measures to run until the end of November. However, the injunction is initially set to expire on November 15 in order to be able to respond promptly to any change in the situation.

In addition, the staff, as well as the top members of the coalition, have expressed support for moving quickly to implement the federal-state resolutions in Frankfort. Mayor Peter Feldmann says: "Citizens have a right to clarity - as do the affected institutions."

According to the decision of the Chancellor and the heads of government of the states, the following institutions and recreational facilities will also close in Frankfurt until probably the end of November (and hopefully not longer!!):

d. Recreational and amateur sports operations, except individual sports, alone, in pairs or with one's household, on and in all public and private sports facilities,

For Frankfurt, this means that the museums, the zoo and the Palmengarten will also close and that the autumn market ("Herbst in der Stadt") will also end early and take place on 31.10. for the last time will take place.

Gastronomic businesses may only offer out-of-home consumption, according to the federal-state decision. Service businesses in the field of personal care such as cosmetic studios, massage practices, tattoo studios and similar businesses will be closed, because in this area a physical proximity is indispensable.

Mayor Peter Feldmann calls all Frankfurt and Frankfurt women to special prudence and solidarity: "Now is the time! We have to push back the virus together. Every Frankfurter is called upon. Reduce your contacts, keep your distance, wear a mask, observe the hygiene rules. Let's show Corona the red card!"

Mayor Uwe Becker emphasizes: "The decisions in these days are not easy to make, but they are necessary in my eyes. In our neighboring countries, sometimes even much more far-reaching restrictions are imposed. This also shows how intensively the balancing between the restriction of freedoms, the interference in the economy and public life and the safeguarding of health takes place in our country."

Health Minister Stefan Majer says: "In terms of impact and acceptance, it is good that uniform measures were adopted yesterday by the federal and state governments. We are now continuing to work on flanking measures and use the next four weeks to look back critically at the opening of the last few months. We need to identify the weak points of the deceptive normality that have given the virus too much room. And our goal must be: Frankfurt wears mask! We define when and where to take it off - not the other way around."

The next few weeks will not be easy, especially for the institutions affected by the closures and their staff*. But we can all help them make sure that the one-month closure stays in place and that it doesn't have to be extended or even expanded. So: Mask (all the way!!!) up to over the nose, keep your distance and reduce contacts. Even if you doubt the measures, now is the time for all of us to stick together!