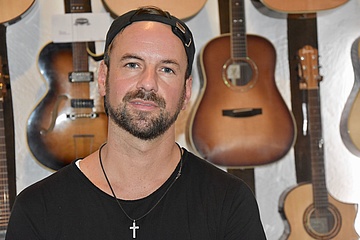 What began in 2011 with the founding of his own YouTube channel and the interpretation of cover versions has since developed into an impressive career. With over 100 million video views on YouTube and more than 500,000 fans on Facebook, the likeable singer/songwriter is undoubtedly what you'd call an internet phenomenon. But not everyone who has success on the net can translate it to the album charts or concert halls. But Joel Brandenstein has impressively managed to do just that. His Album debut "Emotionen" went straight to #1 in the German charts and his first concerts sold out within 48 hours. This included the gig at the Batschkapp earlier this year, which will now be followed by another concert at the Jahrhunderthalle on October 10 due to popular demand.

We met Joel Brandenstein for an interview at Frankfurt's legendary music store "Cream" in the Bahnhofsviertel. A perfect location for a musical interview, as the greats of music history have stopped by and bought guitars here. Here Joel Brandenstein revealed to us that despite his popularity on YouTube, he was surprised by the huge success. "If someone had told me last year that this would happen, I would have called them crazy," he says, proudly adding that it was all like a big dream. He would never have thought that the whole thing would end up like this in a positive way, when he had put his first video on the net without any expectations.

Although he had already written his own songs back then, the inhibition threshold was just too big to start with it right away. That's why he first chose songs he liked himself and then interpreted them in his very own way. This went down so well that his videos gained more and more clicks. "At some point, I said to myself that I would like to try it with my own song," says Brandenstein. The fact that it was his own songs, of all things, that made the highest waves showed the musician that it was now time to finish writing his first album.

After the first single "Diese Liebe" was still self-distributed in December 2014 and made it into the charts as the highest new entry completely without the help of radio and television, it didn't take long for Brandenstein's email inbox to be filled with messages from all the well-known record companies. But at first, he was hesitant. What he had achieved without the backing of a record label just felt too good to change. Not to make a hasty decision in such a situation, but to think carefully about the next step, was certainly a wise decision, which is now honored by a deserved success.

"Emotions" is a very quiet, soulful album. "Even when I was young, I really liked emotional and ballad songs," reveals and Joel Brandenstein. "And now I make this kind of music myself as a logical consequence". He needs goosebumps when he listens to music and with ballads that's exactly what's most likely to happen. His many fans will only be able to confirm this after listening to the songs on the album. His lyrics are primarily about things that have happened in his life. It is important to him that every lyric has a relation to his life, only then it feels authentic to him and he can put all his emotions into the song. And you can hear and feel that.

Joel Brandenstein has proven that you can win people's hearts with a love for music and with passionate songs. Sometimes you don't even need a big marketing machine, just a piano, a warm voice and insightful lyrics are enough. If you liked his YouTube videos, you should definitely not miss "Emotionen" on CD and live on stage.

The video of Joel Brandenstein's performance of the song ZEITMASCHINE for Frankfurt-Tipp.de can be found HERE

You can find more info about the concert HERE