Full closure due to bridge construction work in Rödelheim, bus routes will be diverted
from FFM Aktuell 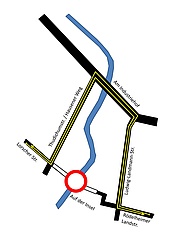 (kus) During bridge construction work by the Office of Road Construction and Development (ASE), the Niddabrücke bridge in Reichsburgstraße/Auf der Insel will be fully closed to through traffic from 6 a.m. Friday, September 1, to 4 a.m. Monday, September 4. A detour will be in place in both directions via Thudichumstraße, Hausener Weg, Am Industriehof and Ludwig-Landmann-Straße.

The lifting of the approximately 70-tonne, 30-metre-long components is scheduled for Saturday, September 2. The time before and after the lifting is needed to erect and dismantle the mobile crane required for this purpose. During the direct lifting of the components, the bridge can also temporarily not be crossed on foot or by bicycle for safety reasons.

Due to the closure, the municipal public transport company traffiQ must also reroute bus routes 34, 72 and n1. Lines 34 and n1 are being diverted between the "Sternbrücke" stop, which has been relocated by a few metres, and Rödelheim station via Ludwig-Landmann-Straße and Hausener Weg. The stops "Parkweg" and "Alt-Rödelheim" are cancelled. Line 72 will only run between Nordwestzentrum and Sternbrücke during this time. Information about this is available at <link http: www.traffiq.de _blank>