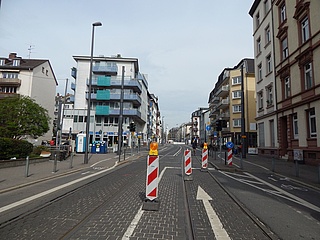 There are once again traffic obstructions in downtown Frankfurt. The highly frequented Eckenheimer Landstraße must be fully closed to traffic in both directions between Keplerstraße and Adlerflychtstraße from Monday, May 3, to Wednesday, May 12, due to track construction work by Verkehrsgesellschaft Frankfurt. Pedestrians can pass the construction site.

A detour recommendation for cars (and cyclists) is via the parallel Eschersheimer Landstraße.

Shortened line U5 - rail replacement service between Konstablerwache and Hauptfriedhof

Of course, the U5 line is also affected by the work. This runs during the period of track work only shortened in the section between Preungesheim and Hauptfriedhof. A rail replacement service will be provided between the replacement stops Marbachweg/Sozialzentrum, Hauptfriedhof, Deutsche Nationalbibliothek via Friedberger Landstraße to Konstablerwache. The stations Musterschule and Glauburgstraße will not be served. Between Konstablerwache and Hauptbahnhof, passengers can use the U4 underground line and the S-Bahn.

The night bus line N5 also has to be diverted during the road closure. From Konstablerwache in the direction of Preungesheim, it will travel via Friedberger Landstraße and on to the National Library, in the opposite direction via Oeder Weg. The Musterschule stop will be omitted in both directions, as will the Scheffeleck and Glauburgstraße stops out of town.

Due to this longer route, the night buses will arrive a few minutes later in Preungesheim and start slightly earlier in the opposite direction. This also affects those night trips that continue as line 39 to Berkersheim Mitte and back.

In the timetable information at http://www.rmv-frankfurt.de and in the app, the current timetables can be accessed during the construction work, and the staff on the RMV service telephone at 069/2424-8024 will also be happy to help.

Further up-to-date traffic information can be found at https://mainziel.de/