Full closure of Miquelallee due to bridge works
from FFM Aktuell 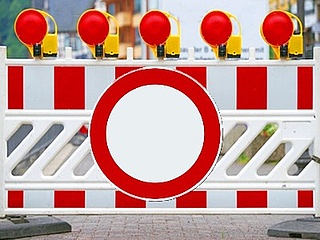 Closure in the direction of Hauptbahnhof, Messe, Bockenheim, Universität and Palmengarten

(ffm) Construction work on the bridge over Miquelknoten is in full swing. The Office of Road Construction and Development (ASE) is repairing the bridge all around. The ASE has already been working under the structure since mid-March. There the concrete was rehabilitated. This is important to permanently secure the bridge's statics. In the coming months, the bridge bearings, the roadway and the railing will be thoroughly renewed. Work on this will begin on the bridge itself on 2 May. The extensive construction work is scheduled to be completed by the end of December. The repair of the bridge is part of the bridge construction program of the city of Frankfurt am Main.

Due to the bridge construction work by ASE, Miquelallee will be fully closed from the southbound exit - with destinations Hauptbahnhof, Messe, Bockenheim, Universität and Palmengarten - from Thursday, 2. May, until December. A wide bypass is recommended.

A traffic important east-south connection will be cut. It's being triggered by a new phase of construction as part of repairs to the eastbound Miquelknot Bridge. The full closure begins after Joachim-Becher-Strasse and ends before Rosa-Luxemburg-Strasse joins the southern Miquelallee. Locally, traffic will be diverted first in a northerly direction via Rosa-Luxemburg-Straße, a turning loop in Platenstraße and then again in a southerly direction via Rosa-Luxemburg-Straße. For this east-south traffic connection there is no ideal turning possibility, therefore a wide bypass is recommended for those who know the area. The north-south and south-north traffic relations will be maintained. The already rehabilitated western Miquelknoten bridge will be used for this purpose in two-directional traffic. The south-east link in the direction of Adickesallee is not affected.

Further up-to-date traffic information can be found on the Internet at: http://www.mainziel.de

Bus route 32 via Westend to Westbahnhof

The bus route 32 in the direction of Westbahnhof runs during this time from the stop Betramstraße a diversion through the Westend. From Betramstraße, it follows the route of the line 64 to Bremer Platz and from there the route of the 75 bus to Bockenheimer Warte. The stops Miquel-/ Hansaallee, Grüneburgpark and Botanischer Garten are cancelled in this direction. The timetable information on the Internet at http://www.rmv-frankfurt.de will help. Information on the best travel option is also available from the RMV service telephone, which can be reached round the clock on 069/24248024.