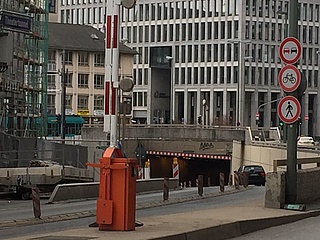 Not for the first time, the busy Theater Tunnel in downtown Frankfurt has to be closed to traffic due to important maintenance and assembly work. This will also be the case from Monday evening, April 9, from 8 p.m. until Thursday afternoon, April 12, around 4 p.m.

The works leading to this full closure are routinely carried out every six months. Through them, traffic safety and technical reliability are maintained. They also serve to keep the road clean and to safeguard its existence.

Deroutes are in place during the maintenance and cleaning work and are signposted accordingly. The detour will run from Berliner Straße in the direction of Gutleutstraße via Neue Mainzer Straße, Taunustor and Gallusanlage. In the opposite direction, the detour will run from Gutleutstraße via Wilhelm-Leuschner-Straße, Hofstraße and Neue Mainzer Straße to Berliner Straße.

The work in the Theater Tunnel results in various synergies: for example, extensive repair work on the tunnel's drainage system is being carried out at the same time. In addition, the closure will enable work to be carried out on the safety-related installations in connection with the redesign of the east portal.

In addition, two construction cranes will be dismantled at the neighboring "Kornmarktarkaden" construction site during this time. Here, the space at the east portal of the tunnel will be used for mobile crane positioning as well as dismantling and loading work.

The Theatertunnel has been a central artery in Frankfurt's city centre since it was opened in spring 1974. Over 14,000 vehicles pass through the 415-metre tunnel every day. Since 2008, the Theatertunnel has been state-of-the-art in accordance with the Guidelines for the Equipment and Operation of Road Tunnels (RABT) and is permanently monitored by the Tunnel Control Center of the State of Hesse with regard to video and systems.

The responsibility for the Theatre Tunnel lies with the Office of Road Construction and Development. Faults and defects are documented during regular inspections. Maintenance and cleaning activities are performed semi-annually.

During the cleaning work, the technical rooms are cleaned, tunnel and ramp walls, lighting and signage equipment, roadway and emergency walkways as well as jet fans, video cameras and other technical equipment are freed from the residues from exhaust fumes and tire abrasion, but also registered de-icing salts and leaves. Finally, the street drains are cleaned and the base lines are flushed.

The maintenance work includes all technical systems in the operating rooms, the emergency exits and the tunnel tube itself, from the fire alarm system to the video and emergency power system to the lighting, tunnel radio system and room ventilation.