Fun, games and charity at the Festival4Family 2019
from FFM Aktuell 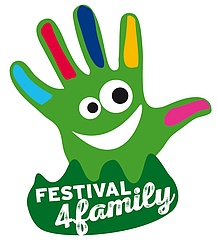 One of Germany's biggest family festivals once again attracted thousands to Frankfurt's Commerzbank Arena on May 26.

Frankfurt am Main - In beautiful weather, around 30,000 visitors celebrated throughout the day on Sunday, May 26, 2019, at the now ninth Festival4Family in the Commerzbank Arena. From 10 a.m. to 6 p.m., the Eintracht Stadium was transformed into a fun and games paradise for young and old. More than 100 hands-on activities and star guests provided entertainment at the family festival of the Frankfurt-based Trifels Verlag.

Numerous play stations, stands, wheels of fortune, musical instruments and many other attractions invited visitors to try them out. The BABY born playhouse, a Lil' Snaps dance coaching with The Voice Kids winner Anisa, a huge bouncy castle world, the Nintendo Summer Tour, a virtual Europa-Park roller coaster ride, the Kettler Kettcup, make-up and photo activities, the Fraport luggage belt slide, skill and coordination games, the Lego play station, football billiards - all this, and much more, was on offer.

In front of the arena, clubs from the Sportkreis Frankfurt and the Sportjugend Frankfurt presented challenging samples of their skills on the sports stage.

The children's stage was also located in the outdoor area. Moderated by KiKA reporter Leontina, fairy tale theatre - performed by the Galli Theater Wiesbaden and the StoryStage Theater Aschaffenburg - could be experienced there and the globetrotter Clown Filou could be marvelled at.

At the autograph and selfie station, children could grab signed photos with the mouse, the dragon Coconut, Shaun the sheep and The Voice Kids winners Anisa and Mimi & Josy. hr3 Morningshow presenter Tobi Kämmerer once again led through the stage programme. The theme was football with Eintracht mascot Attila, Eintracht coaching legend Dragoslav "Stepi" Stepanović and German football world champion Nia Künzer. Mayor Peter Feldmann, one of the patrons of the festival, addressed the visitors personally from the stage.

Among others, the acrobatic clowns Alex & Joschi and members of TSV Dudenhofen provided sporting entertainment with their unicycle show. Musically, Markus Becker and The Voice Kids winners Anisa and Mimi & Josy heated up the audience alongside "Supertalent" finalist Salvatore Scire, "KiKa Dein Song" 2016 winner Leontina Klein and the newcomer band Triple A. Singer Oliver Mager was supported on stage by the mascots Fluggi and Kruschel and of course also performed his specially composed RheinMain4Family song in the grand finale.

There was also a lot of action at the stand of the 13th Trifels children's painting competition. Here, children between the ages of four and 14 were invited to create a picture on the theme "My best holiday!". The jury members Andreas Peter from the AOK Hessen, children's musician Oliver Mager, Björn Fritsch, Head of Marketing at Trifels Verlag GmbH, as well as singer and entertainer Markus Becker had the difficult task of choosing the winning pictures from the many creative entries. During the award ceremony, the lucky winners were finally honoured live on stage by Europa Park mascot Ed Euromaus and Frankfurt Airport mascot Fluggi.

With the brand-new charity action "Festival4Family Surprise Bag" as well as the foam kiss sale by Köhler, donations were collected for the benefit of the charity partners Bärenherz Stiftung and Stiftung Lesen.