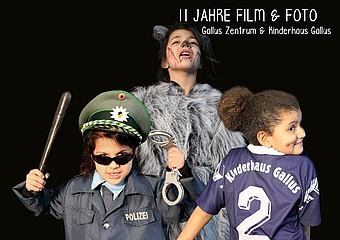 (pia) Gallus Zentrum celebrates "11 years of film & Foto" with a film screening and photo exhibition on Thursday, September 22, at 4pm at the Gallus Zentrum. On view will be three films and photo series, celebrating eleven years of media education collaboration, with the young filmmakers and photographers in attendance.

Since 2005, the Gallus Zentrum and the Kinderhaus Gallus have been realising creative media projects together. On display are films produced by children themselves, a multilingual photo series on the theme of "What do you love about the children's house", 26 imaginative portraits of girls, and pictures from the district project "Focus Gallus".

For the 9- to 14-year-old children, the films and photos proved to be an important means of engaging with their environment in a playful way. For example, the films deal with topics such as football, exclusion and crime. The stories are told from a child's perspective and address social injustices, often with a wink. They reflect the themes and interests of children from the Gallus.

Some of the twelve films in total were awarded a prize at the Frankfurt film festival "Visionale" and can also be seen on the Gallus Zentrum YouTube channel, for example "Laura&acute;s new school" at <link https: www.youtube.com _blank>