GAMEPLACES-DINNER in Frankfurt brings politics, games industry and media industry to one table
from FFM Aktuell 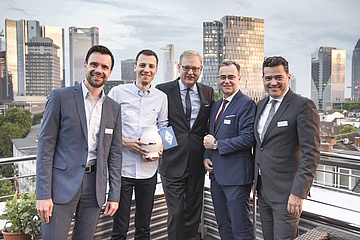 (ffm) At the GAMEPLACES-DINNER on Wednesday, May 23, Felix Falk (game - Association of the German Games Industry), Stefan Marcinek (ASSEMBLE Entertainment/GDD), Frankfurt's Head of Economic Development Markus Frank and Rolf Krämer from the Hessian Ministry of Economics were present, along with numerous other guests. The dinner took place at the invitation of the Frankfurt Economic Development Corporation and on the occasion of the GermanDevDays and the Hessen Games Week.

In the evening, the who's who of the German games industry gathered at Frankfurt's Westend Terraces. The occasion was a VIP dinner hosted by the industry platform GAMEPLACES in the context of the GermanDevDays (GDD) and the Hessen Games Week. With the dinner, the organizers pursued several goals. Among other things, the networking of companies based in the region with decision-makers and players from the rest of Germany was to be promoted and an intensive, albeit informal, dialogue between the industry and politics was to be initiated. The bill worked out: both aspiring talents and developers from all over Germany and well-known companies from the region, including Deck13, Crytek, keen games and Zenimax Germany, representatives of industry associations, training and funding institutions as well as from politics attended the dinner.

"We are proud of the diverse and growing games industry in Hessen and are pleased to be able to support an entire Hessen Games Week for the first time this year," said Rolf Krämer, who is responsible for the cultural and creative industries among other things at the Hessen Ministry of Economics, on the sidelines of the dinner. Only recently, the ministry announced that it would support serious games developers from Hessen with 200,000 euros starting this year.

FrankfurtRhineMain has a dense network of games, software and IT service companies and is one of the most important locations nationwide, stated Markus Frank, the city's head of economic affairs. In 2017, several Frankfurt developers were once again honored: Deck13 (The Surge), keen games (Portal Knights) or Crytek (Robinson - The Journey). "This impressively proves that Frankfurt am Main is a good location for game developers and the entire games industry," said Frank.

This assessment was also shared by GDD initiator Stefan Marcinek: He was particularly pleased that the GDD continued to expand and that the move to a larger location was successful. In addition to the extensive conference programme, the GDD 2018 will also present projects from twelve selected young developer teams in Frankfurt's Gallus. For the first time, the GDD will also be flanked by other events: For example, the Games Couch Conference in Bad Nauheim or the Laser Tag Tournament in Frankfurt will take place under the umbrella brand Hessen Games Week. "We are optimistic that this will ensure a high level of industry attention," said Marcinek, whose special commitment to the location was honored on May 23 with the 'Creative Hub Frankfurt-Bembel' from the city of Frankfurt am Main.

Games CEO Felix Falk addressed the key role of games in the digitization of society and the economy: "The games industry is the pioneer of digitization; its innovative technologies and approaches are being adopted and applied by more and more industries." Especially because of this key role, it needs to be strengthened in Germany, he said. Here, both the commitment of regional initiatives such as GAMEPLACES and the expansion of regional funding, as recently in Hesse, are important. "In addition, we also urgently need substantial games funding at the federal level. This would enable us to catch up with internationally successful games locations such as the UK or Canada and also strengthen Germany as a digital business location overall," said Falk.

GAMEPLACES is the platform for the games and video games industry in FrankfurtRhineMain. Since 2006, it has been addressing current trends, opinions or developments with various formats and enables all interested parties to build and expand networks, develop new ideas or identify and exploit potential. The Competence Center Creative Industries of the Frankfurt Economic Development Corporation is in charge; the partner of the industry platform is gamearea-FRM.