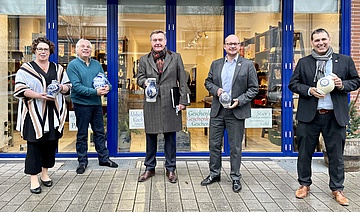 In the first half of 2022, a very special museum is scheduled to open in Hanau, for which a visit from Frankfurt will also be worthwhile: At the Heumarkt in Hanau's city centre, the first Hessian cider museum - the "Gerippte Museum" - will open its doors to interested visitors. The reconstruction works are completely finished, the first exhibition is set up. This was announced by the board of the sponsoring association Apfelwein-Centrum Hessen (ACH) during a meeting with the most important financing partners. Besides the Main-Kinzig district, this includes the city of Hanau as well as the FrankfurtRhineMain regional association and the association "Hessische Apfelwein- und Obstwiesenroute Regionalschleife Main-Kinzig".

The opening had to be postponed several times due to the Corona pandemic. Now, Hesse's first cider museum is expected to open its doors to throngs of visitors no later than the summer of 2022. "We would have liked to open earlier, but that would not have made sense due to the pandemic situation," says Jörg Stier, chairman of the ACH and curator of the "Geripptes Museum".

Despite the pandemic-related delays, representatives of the major sponsors were very pleased with the progress of the project. "The museum is a wonderful enrichment, and we are grateful and happy that it is located in Hanau," confessed Hanau's Lord Mayor Claus Kaminsky in his greeting. He also expressed his conviction that "this story is not over yet." Susanne Simmler, First District Commissioner of the Main-Kinzig district, also considers the "Gerippte Museum" to be an attractive point of attraction: "We hope that many people will come to the region and to Hanau to get a taste of a piece of Hessian identity." She thanked "everyone who believed in this idea." Rouven Kötter, first alderman of the FrankfurtRhineMain Regional Association, also believes "that the museum can be a drawing card for Hanau and will attract many people." Michael Göllner, chairman of the Hessian Cider and Orchard Route Regional Loop Main-Kinzig, thinks it's important to "make the region tangible." He is convinced: "Cider makes our region special."

The first exhibition in the "Gerippten Museum", subtitled "Room for Cider Culture", deals with a drinking ceremony that only exists in Hesse: Here, cider is served in a bembler and poured into "ribbed" glasses, which protect the tasting contents from insects and falling leaves with a "little lid." The central exhibits of the first exhibition are the largest Bembel in the world, which, with a capacity of 670 litres and a weight of a good 300 kilograms, has made it into the "Guinness Book of Records", as well as the largest "Gerippte" in the world, which can hold 80 litres of cider. Bembel - Deckel - Gerippte: For all three categories the volunteers of the ACH have collected numerous, partly rare and spectacular exhibits, which are described in detail. Display boards explain six different perspectives on the Hessian national drink. They deal with production, history, economy, ecology, enjoyment and culture as well as the international significance of the "Stöffche". A digital slideshow tells the story of the production and transport of the world-record bembler. "With this first exhibition, we are giving a comprehensive overview of the cultural asset of cider," curator Jörg Stier is convinced and adds: "It is above all its diversity that we want to present." This diversity will also be presented in multimedia: A large part of the exhibits can also be admired on the museum's website after the official opening.