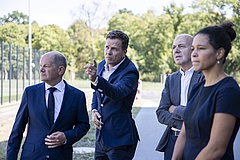 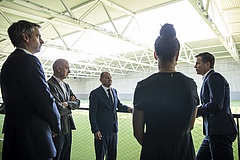 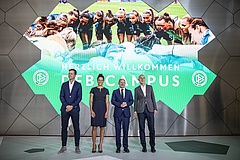 "A really great place has been created here full of men and women who love soccer," said German Chancellor Olaf Scholz at a press conference he held together with association president Bernd Neuendorf during a visit to the recently officially inaugurated DFB campus. Scholz was very taken with the architecture and the soccer pitches that have been created on the site of the former horse racing track in Niederrad, and of course enjoyed the view of Frankfurt's skyline, which is unique in Germany, during his tour, during which he was accompanied by Neuendorf, vice president Celia Sasic and national team director Oliver Bierhoff.

But the central theme of his visit was the demand for "Equal Pay". The Chancellor had already made it clear during the European Championships that it must also apply in sport that men and women should be paid equally. It is an important discussion, to which Neuendorf also signaled his willingness. At the press conference, Scholz expressed his hope that this new, impressive venue for German soccer would also be an incentive for many, if they are just starting out in soccer somewhere in Germany as girls or boys, that they would like to be right here at some point, ultimately to be prepared for an international tournament as a national player on the DFB campus. Therefore, he said, better promoting the interest of many men and women, girls and boys in soccer is enormously important.

Scholz also emphasized once again how proud he was of the performance of the women's national team at the European soccer championships and the enthusiasm that the team has generated everywhere. He hopes that this enthusiasm will continue to have an effect for a long time to come - not only on the players, but on everyone who, in view of such achievements, says: "That's my dream too, I want to achieve that too! Of course, the bonuses paid out at such tournaments play a major role here, which is why it makes absolute sense to discuss equal bonuses for everyone.

Soccer is also enormously important for social cohesion, the chancellor said. Therefore, we should do everything we can to ensure that in difficult times like these, in which we currently find ourselves, soccer retains the role it has had for so long: to keep us together and to inspire us. The Chancellor ended his visit to Frankfurt with the prospect of further talks on the subject of equal pay. It will be interesting to see what results the intensive talks of the DFB announced by Neuendorf will bring.