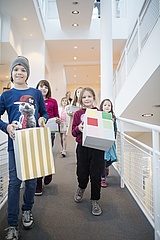 The popular children's program GestalterKids at the Museum Angewandte Kunst once again invites children in 2017 to try out the world of applied art once a month - with shapes, colors, things to touch and do yourself. Children from 5 to 10 years old invent, draw and play their own stories, transform letters into pictures or travel to Japan in just one hour - for a summer picnic in the park.

On the first Sunday of every month, from 3pm to 4.30pm, all GestalterKids are welcome.

All dates in the GestalterKids series from January through June:

8. January (Note: Due to New Year's Day, this workshop will exceptionally be held on the second Sunday in January.)

That's my name! Does it start with an "S," an "H," or a "T"? What do the letters look like? Like a snake or a ladder? Like an umbrella? The illustrator Christoph Niemann has many funny ideas for playing with shapes and letters and changing them. We'll take a look at them in the exhibition Thinking Tools. Design as a Process and then paint pictures ourselves with our own names.

Making up stories is fun! We will pick out an object in the museum and make up an exciting story about it together. What could be in this suitcase? Who did the suitcase belong to? And who ate from that little plate?

And because we can not only talk, but also have arms and legs, we act out the story as a play!

Fill in the blank

Oops, something's missing! The picture isn't finished yet! Where do these tracks lead to? What lies beyond that mountain? And what is hidden inside the ship? We'll whip out our pencils and draw pictures from the Yokohama 1868-1912 exhibition. As the pictures glow learn with quite an imagination.

And action! We look for the most mysterious pictures in the exhibition Yokohama 1868 -1912. As the pictures glow learned and ask: What could happen next? What will the person in the picture do now? With our bodies we continue to tell the stories and try out many ideas. At the end of the workshop, we perform our story in the exhibition space.

Around the world on a picnic blanket: we travel from England to India to faraway Japan in the exhibition Picnic Time. Every year at the time of the cherry blossom, the picnic season begins there with the Hanami festival. And because we are already in Japan and travelling makes you hungry, we prepare the Japanese sweet Dorayaki. We can eat them later with our friends and parents in the park.

Happy or sad, quiet or very loud - a single stroke can decide that in comics. We can get lots of great ideas from the comic author Marc-Antoine Mathieu in the exhibition Cartography of Dreams. Then we'll take up the pen ourselves and tell stories with circles and lines. If you like, you can bring your favourite comic.