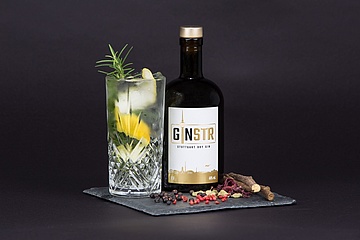 Great news comes from London: There, the best gin of the year was chosen at the International Wine and Spirit Competition (IWSC). 600 different gin producers from 90 countries competed against each other. In the category "World's Best Gin for Gin Tonic", there was a real surprise. A producer from Germany was awarded the prestigious prize. The small distillery GINSTR - Stuttgart Dry Gin was able to assert itself against the well-known global corporations from England, France and the USA and bring the "Gin Tonic Trophy" of the IWSC to Swabia. Congratulations!

It is not only special that the prize went to Germany, but also that a still very young brand could win. The Stuttgart gin has only been on the market for about one and a half years and is therefore already one of the best gins in the world. The young distillers Alexander Franke (34) and Markus Escher (27) can be more than proud of this. Originally, the whole thing was just a hobby for the two, which now attracts worldwide attention. The gin, which is still produced in small quantities in their own distillery, was already honored with the gold medal at the World Spirits Award in spring. This award has now been followed by the recognition as the best gin and tonic in the world, which was very clear: never before has a gin been able to collect so many points from the jury in London as GINSTR from Stuttgart. For this there was even an additional commendation ("Outstanding Gold"). This result can only be described as a remarkable success story Made in Germany. That one of the best gins in the world would one day come from Stuttgart would have been unthinkable years ago.

The IWSC's international jury consists of 400 judges who spent a full seven months this year testing and evaluating wines and spirits from around the world. Founded in 1969, the competition is considered the most important prize on the scene. In mid-November, the makers of GINSTR will be allowed to fly to the motherland of gin, where they will be honored at a gala in the Guildhall, London's historic town hall. Frankfurt-Tipp congratulates to this special victory and sends the best greetings from Hesse to Swabia!