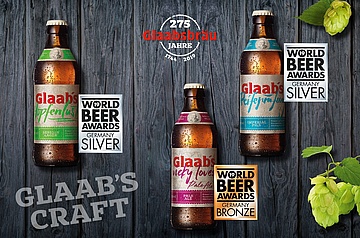 Great joy at Glaabsbräu in Seligenstadt. The oldest brewery in southern Hesse and one of the most modern breweries in Germany received several awards at the World Beer Awards 2019: For Glaab&acute;s craft beers there were two silver and one bronze medal. In the categories "Lager Light" with Glaab's Hopfenlust and "Lager Hoppy Pilsener" with Glaab&acute;s Reifeprüfung there were silver medals. And Glaab&acute;s "Vicky loves Pale Ale" was awarded "Bronze" in the "IPA American Style" category. This is something the Glaabsbräu team can truly be proud of.

Unlike usual beer competitions, only three medals are awarded per category: Gold, Silver and Bronze. The international World Beer Awards annually celebrates the best beers in the world: 3,500 beers from 56 countries were judged by an international panel of experts. To make it to the winner's podium in such global competition is truly an achievement.

"That the main range of our craft beers have been awarded and in addition as second best worldwide with Glaab&acute;s Hopfenlust and Glaab&acute;s Maturity Test and third best with Vicky loves Pale Ale is a huge achievement and a tribute to our special brewing philosophy. We brew all-natural and individually," Julian Menner, master brewer and beer sommelier, emphasizes.

The renowned World Beer Awards annually honor the best international beer varieties. An international panel of experts tastes and presents the awards. The "World's Best Beer" award is a globally recognized distinction for consumers and retailers alike. The taste categories to be evaluated were derived from the generally defined beer groupings, which are based on the respective process and style of beer production.

Nice that three medals went to Seligenstadt in Hesse in 2019. For this, Frankfurt-Tipp also congratulates the entire Glaabsbräu team very warmly!