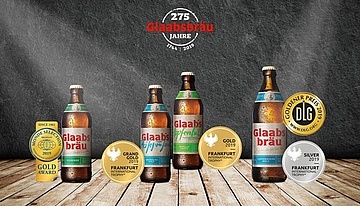 The team at Glaabsbräu, the oldest brewery in southern Hesse and one of the most modern breweries in Germany, can't get out of the celebratory mood: Not only that in June the 275th anniversary will be celebrated with a big party in Seligenstadt. Now, some of the brewery's beers have also won top awards:

A gold award from the Brussels-based institute, Monde Selection, is considered one of the highest honors in the industry. The jury consists only of renowned professionals such as chefs with Michelin stars, oenologists and beer sommeliers of world renown. At the Frankfurt International Beer Trophy, 560 beers from 30 countries were tasted. 159 received awards, 57 of which went to Germany alone. The Grand Gold was awarded just 17 times.

At the German Food Society's (DLG) test centre based in Eschborn, beers are subjected to elaborate laboratory analyses over three months. In addition to taste, the jury also evaluates areas such as fullness, freshness and the purity of the beers. The tests also focus on sensory quality such as colour, appearance, consistency, taste and smell. Glaabsbräu won gold for their Hefeweizen Hell.

"These medals are a recognition of the top quality of our beers and our brewing philosophy.", reports Julian Menner, brewmaster and beer sommelier.

We congratulate Glaabsbräu on these awards and of course on the anniversary, which will be celebrated on 15 and 16 June 2019. For more information, please visit: https://glaabsbraeu.en/275-anniversary/