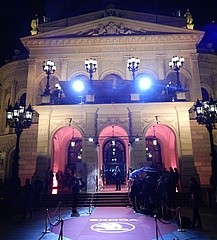 Art and Culture Minister Boris Rhein congratulates the winners of the 2017 Hessian Film and Cinema Award. The award was presented tonight in eight categories - including the new Newcomer Award category. Numerous film and television stars such as Josefine Preuß, Jörg Schüttauf, Corinna Harfouch and August Zirner accepted the invitation to the festive gala at the Alte Oper in Frankfurt. Former award winners such as Margarita Broich and jury members Nina Kronjäger and Florian Bartholomäi also joined in the celebrations.

This year, for the first time, the Newcomer Award, endowed with 7,500 euros, was presented by Minister of Arts and Culture Boris Rhein. It went to Jasna Fritzi Bauer. She was born in Wiesbaden in 1989 and belonged first to the youth club and later to the ensemble of the Hessian State Theatre. She completed her acting training at the Berlin Hochschule für Schauspielkunst "Ernst Busch". From 2012 to 2015 she was on stage at the Vienna Burgtheater. In 2013, she was nominated for the Hessian Television Award as "Best Actress" for her role in Bettina Blümner's drama "Scherbenpark".

Art and Culture Minister Boris Rhein: "Jasna Fritzi Bauer is one of the most expressive and sought-after young actresses of her generation. Her portrayal of problematic young people is unparalleled. With great joy in acting and infectious energy, she awakens empathy in the audience and immediately convinces with her performance. I am delighted to be able to honour such a talented young actress with our new Newcomer Award."

The 2017 Honorary Award of the Hessian Minister President was presented to Ulrich Tukur. The 60-year-old actor, born in Viernheim, Hesse, is known to audiences from multiple award-winning cinema and television films. He is considered one of the most renowned film actors of his generation in Germany.

Other winners of the Hessian Film and Cinema Award are:

The Hessen Cinema Culture Awards recognize commercial and non-commercial cinemas in Hessen. The prizes are awarded for special programming that recognizes the cinemas' cultural commitment.

For commercial cinemas, prize money totaling 75,000 euros was awarded. They went to Mal Seh'n Kino in Frankfurt, the BALI cinemas in Kassel, Filmladen in Kassel, Orfeo's Erben in Frankfurt, Harmonie Kinos in Frankfurt, Capitol Kino in Witzenhausen, Kino Traumstern in Lich, Programmkino Rex in Darmstadt, Lichtspielhaus Lauterbach in Lauterbach and Kammer-Palette-Atelier in Marburg.

"An award ceremony like tonight not only shows the range of acting skills and outstanding directorial work. It also demonstrates the success of good funding that leads to extraordinary projects. In the past year in particular, the Hessian state government has taken decisive steps to further develop Hessen as a film location. For example, the funding conditions have been adjusted, Hessen has been accepted into the state association of major film funding bodies &sbquo;Focus Germany', special support for new talent has been introduced and, finally, more film funding has been made available. As a result, film funding in Hesse now stands at around 10 million euros," concluded Minister of Arts and Culture Boris Rhein.

Up-to-date information on the Hessian Film Prize can also be found at www.hessischer-filmpreis.de