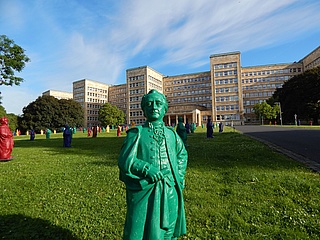 (pia) "Goethe International" is the motto of the 6th Frankfurt Goethe Festwoche, which will take place from September 8 to 17. The public will be offered a diverse cultural programme with a total of 25 events in the fields of literature, film, music, theatre and performance. Goethe's intensive engagement with different languages and cultures and the current international reception of his work will be highlighted.

"With a focus on Goethe's pioneering idea of world literature, this year's festival week is dedicated to an aspect that is of particular topicality for Frankfurt's international and diverse urban society. The dialogical examination of languages and international cultural creation called for by Goethe has lost none of its relevance to this day," says Head of the Department of Culture Ina Hartwig.

This year's Goethe Festival Week will open on 8 September at 7pm in the Goethe House with the exhibition "From the &sbquo;Rhine and Mayn Opposites' to World Literature". It deals with Goethe's journal "Ueber Kunst und Alterthum" (On Art and Antiquity), which was first published 200 years ago and shows an early transnational cultural understanding of the poet. Among those taking part in the extensive supporting programme at the Goethe House in Frankfurt are the President of the German Bundestag, Norbert Lammert, and Christof Wingertszahn, Director of the Goethe Museum in Düsseldorf.

Selected productions and film adaptations by international directors reflect the diversity of Goethe's reception: Schauspiel Frankfurt tells "Iphigenie" as a bloodthirsty family story, while Theater Willy Praml devotes itself to the humanitarian character. In addition to a Spanish "Clavigo" film screening by the Instituto Cervantes Frankfurt, one can look forward to a Russian "Faust" film adaptation and two French-language "Werther" films, which will be shown at the Deutsches Filmmuseum. The Romanfabrik invites you to a multilingual reading of poems from the "West-Eastern Divan", while studioNAXOS presents performances by international artists on three consecutive days. Concerts, lectures, panel discussions and numerous contributions by hr2-kultur round off the programme.

The Frankfurt Goethe Festival is a cooperative venture - there is no artistic director, but the individual events are developed and organised by the participating institutions. This year, events and contributions from the Freies Deutsches Hochstift/Frankfurt Goethe Museum, Schauspiel Frankfurt, Deutsches Filminstitut - DIF /Deutsches Filmmuseum Frankfurt am Main, hr2-kultur, studioNAXOS, Instituto Cervantes Frankfurt, Romanfabrik, Theater Willy Praml, Accademia Italiana della Cucina and the Kulturamt Frankfurt am Main are bundled into the festival.