Goethe is now available as a stamp
from FFM Aktuell 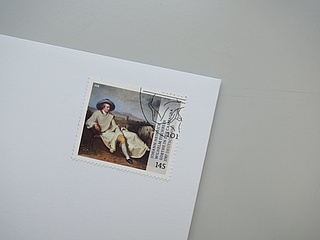 As of today, Frankfurt's most famous son is available as a stamp. So Johann Wolfgang von Goethe, who was known for loving to travel during his lifetime, can now be sent around the world. The painting "Goethe in the Roman Campagna" by Johann Heinrich Wilhelm Tischbein from Frankfurt's Städel Museum now adorns a 145 cent stamp. This is guaranteed to enjoy great popularity, and not only among Frankfurt philatelists.

"My portrait will be happy, it resembles very much," Germany's most famous poet recalls in his "Italian Journey" (two volumes, 1816/17). When Johann Wolfgang von Goethe travelled to the "land where the lemons bloom" between 1786 and 1788, he became close friends with the German painter Johann Heinrich Wilhelm Tischbein, who lived in Rome. Tischbein was an ardent admirer of the respected man of letters and took the opportunity to paint a life-size portrait of him in the midst of the Italian landscape. This oil painting "Goethe in the Campagna", created around 1787, had a decisive influence on the idea of his external appearance.

In the painting Goethe rests half sitting, half lying on a broken Egyptian obelisk and gazes pensively into the distance. In the near distance is a Greek marble relief depicting figures from the Iphigenia saga. Tischbein thus refers to Goethe's stage play "Iphigenia on Tauris", which the poet cast in verse during his stay. Next to the bas-relief is an overturned composite capital from Roman times. In the background is an Arcadian fantasy landscape, within it a round tower - the tomb of Caecilia Metella - the ruins of an aqueduct, temple remains, dwellings, and on the horizon a mountain range, which is probably the Alban Hills or the Sabine Mountains.

Not even the much-described anatomical as well as color deficiencies can mitigate the imposing aura of the painting. For example, the depiction of the right foot, which appears to be a left one, is puzzling. Nevertheless, it is considered one of the most famous paintings in German art history and at the same time an ideal embodiment of the poet. After several previous owners, it entered the collection of Frankfurt's Städel Museum in 1887 as a gift from Baroness Ad&egrave;le von Rothschild, and still inspires the deciphering of its mysteries today.