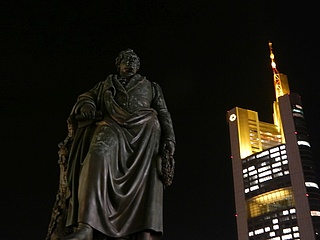 Millions know his melodies, many films are simply unimaginable without his music: we are talking, of course, about Oscar winner Hans Zimmer, whose film music is so popular that Zimmer himself has been able to easily sell out large venues such as the Commerzbank Arena with live concerts. He is one of Hollywood's most influential composers - and a native of Frankfurt! A good reason to honour Hans Zimmer with the Goethe Plaque. "With Hans Zimmer, we are not only honouring an outstanding composer, musician and producer - we are also honouring a great son of our city who reaches the whole world with his works," said Lord Mayor Peter Feldmann after the magistrate's decision. Zimmer is - as it says in the statutes of the Goetheplakette - worthy of an honor dedicated to the memory of Goethe because of his creative work, and even more: "Frankfurt-born Hans Zimmer has been setting standards for film music for over 30 years and has been influential in this respect. Starting with &sbquo;Rain Man', for which he received his first Oscar nomination in 1989. Hans Zimmer's music has an impact far beyond cinema. He manages to condense atmosphere, set images to music and make feelings audible in his compositions, whether in animated films such as &sbquo;The Lion King', for which he won an Oscar in 1995, or on more recent dramas such as &sbquo;Interstellar' or &sbquo;Dunkirk'. The directors he regularly works with, such as Ridley Scott, Gore Verbinski or Christopher Nolan, also impressively show the league he is in. He is a Hollywood icon while being a cultural ambassador for our country and our city."

This also applies to artist and photographer Sandra Mann, who will also be honoured with the Goethe Plaque this year for her outstanding achievements in the cultural field. Mayor Peter Feldmann is delighted about the award for the Frankfurt-based artist: "Sandra Mann attracted the attention of the art scene to her work early on, for example when the Museum of Modern Art under Jean-Christophe Ammann acquired her first works for its collection while she was still a student. Since then, she has established a firm place for herself on the international photographic art scene. The city of Frankfurt is very proud to have an artist like Sandra Mann in its midst - and now to award her with the Goethe Plaque."

"With Sandra Mann, the City of Frankfurt is honoring one of the most important contemporary female photographers who has found her way into the international art scene from here," said Ina Hartwig, Head of the Department of Culture, congratulating the Frankfurt artist. "In her multi-layered &OElig;uvre, documentary and staged photographs stand side by side with spatial installations, sculptural works or video films in equal measure. Long celebrated as one of the finest photographic artists working today, she is thus a worthy recipient of the Goethe Plaque."

Sandra Mann's works are represented in national and international collections. In addition, she curates exhibitions, is a member of the Deutscher Künstlerbund, a founding member of the international curatorial network Qipo, and works as a jury member in photography and art competitions as well as a lecturer in photography and visual language at the ESOD European School of Design in Frankfurt am Main. She is an ambassador for the "Keep the World Foundation" and is involved with the "Stiftung Palmengarten und Botanischer Garten Frankfurt am Main".

The Goethe Plaque was re-established as an award by the Magistrate of the City of Frankfurt am Main in 1947, following its original establishment in 1932. The Goethe Plaque, designed by Georg Krämer, has since been awarded to "poets, writers, artists and scientists and other personalities of cultural life [.] who, through their creative work, are worthy of a tribute dedicated to the memory of Goethe."