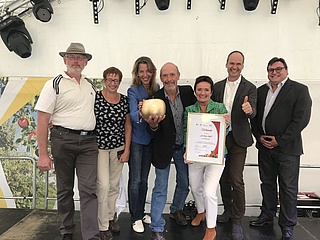 Until Sunday, the Roßmarkt in Frankfurt's city centre will be celebrating the Hessians' favourite drink - cider. The popular cider festival is the ideal place to also pay tribute to the people who have rendered outstanding services to Hessen's meadow orchards. For such people, the Nature Conservation Academy of Hesse, the MGH GUTES AUS HESSEN GmbH and the Association of Hessian Cider and Fruit Juice Presses (Verband der Hessischen Apfelwein- und Fruchtsaft-Keltereien e. V.) created the award of the Golden Apple in 2007.

This year, a real "all-round caretaker" was honored as Hesse's best meadow orchard protector: Torsten Horn from Eschwege. He takes care of several orchards in the Werra-Meißner district. Whether it is the planting of old fruit varieties, sheep grazing, bird nesting boxes and beehives, Torsten Horn carries out nature conservation with a lot of heart and blood, which has to be appreciated. And so City Councillor Rosemarie Heilig presented the dedicated meadow orchard protector with the award along with prize money of 1,000 euros.

"It always impresses me how much people identify with our cultural asset, the meadow orchard, and invest so much time and passion in its care," Rosemarie Heilig noted at the award ceremony. "Torsten Horn is an outstanding example of this and more than deserves the Golden Apple." "I am very pleased that we learned of Mr. Horn's commitment through his application for the Golden Apple," said also Albert Langsdorf, head of the Nature Conservation Academy of Hesse and member of the seven-member jury consisting of representatives of the initiators of the Golden Apple. "It quickly became clear that he would be this year's winner of the award."

Torsten Horn has since 2015 a sponsorship contract for fruit tree care on a meadow orchard near Eschwege, a year earlier he had leased another meadow from the city. Both meadows together are 8,800 square meters in size and some of them have older trees. The 60 fruit trees in the meadows are mostly apple trees of common varieties such as Kaiser Wilhelm, Weißer Glockenapfel and Goldparmäne, but there are also pear, plum, sweet and sour cherry trees. Two years ago, Torsten Horn replaced some of the trees with old apple varieties such as Körler Edelapfel, Heuchelheimer Schneeapfel and Martens Sämling as well as two Mirabellensorten, Nancy- and Metzmirabelle. As a member of the BUND local group Werra-Meißner-Kreis, he was also involved in the planting of a "Reiser meadow" for the preservation of native fruit varieties and was able to contribute his experience in grafting fruit trees, among other things. 25 trees of old regional varieties are available for further planting in his cultivation bed. His meadows and also those of the BUND keep his Shropshire sheep short. In addition, sheep grazing protects against excessive vole pressure. The areas are cultivated without fertilizers and pesticides. The fruit that is not used for his own consumption is given to the Werra-Meißner Orchard Initiative. In addition, Torsten Horn has hung up 30 nesting boxes for different bird species on his land. A beekeeper friend provides his bees for pollination. The honey harvest is so good that he can set up more hives.

"Even in the twelfth year of the award, the Golden Apple does not lose its appeal," notes Julia Kraushaar, Managing Director MGH Gutes aus Hessen GmbH. "We had numerous applications from private individuals and organizations." "Orchard meadow protection is and remains an important topic in nature conservation," explains Albert Langsdorf. "The meadows provide habitats for more than 5,000 animal and plant species and are therefore valuable biotopes." In her laudatory speech, City Councillor Heilig also emphasized the great importance of the meadow orchards: "The meadows shape large parts of our local landscape and deserve special protection. However, they can only be preserved in the long term if a sensible use of the fruit is ensured and there is awareness and acceptance among the population for the native orchards."

The sensible use of fruit is especially close to the heart of Martin Heil, chairman of the Association of Hessian Cider and Fruit Juice Press Houses (Verband der Hessischen Apfelwein- und Fruchtsaft-Keltereien e. V.). "Every year, valuable natural resources still remain unused on Hessian meadow orchards. Under the motto &sbquo;Apples belong in the glass!' we call on meadow orchard owners to help process as many local meadow orchard apples as possible into cider and apple juice. Those who harvest their apples at the right time and bring them to the press house make an important contribution to the preservation of the meadow orchard.