Good news for football fans: Frankfurt Galaxy is coming back
from FFM Aktuell 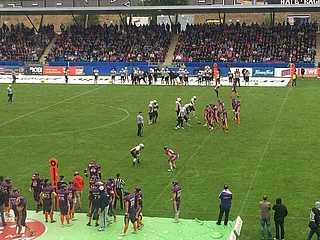 Frankfurt in football fever - that was always the case when the Frankfurt Galaxy team played. Up to 40,000 fans cheered the players in the Waldstadion at the time. The four-time World Bowl champion was dissolved together with NFL Europe in 2007. But now the club is on the verge of a comeback. In the summer, Frankfurt Galaxy will compete in the newly formed European League of Football (ELF). The stadium on the Bornheimer Hang, the PSD Bank Arena, will probably become the new home of the footballers.

In the ELF, eight teams will initially fight for the title. In addition to the players from Frankfurt, the Hamburg Sea Devils, the Wroclaw Panthers from Poland, the Barcelona Gladiators, the Stuttgart Scorpions, the German Knights 1367 Lower Saxony, the Ingolstadt Praetorians and a team from Berlin will also be competing. The ultimate goal of the ELF is for the league to consist of 24 teams in total.

Now, of course, hopes are high that the new Frankfurt Galaxy team will also be able to match the glory of days gone by - both athletically and in terms of fans. If thousands of fans are once again infected by football fever, the team could well play home games in Eintracht's living room, Deutsche Bank Park, as it once did. Of course, this is still a long way off and therefore speculation. But one thing is certain: Frankfurt Galaxy is back! And for Frankfurt football fans, that's the news that counts today!

You can find the ELF's official homepage at: https://www.europeanleague.football/