Goosebumps at BODYGUARD - THE MUSICAL in Frankfurt
from Frankfurt-Tip 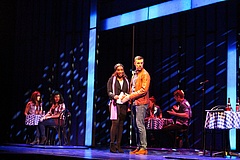 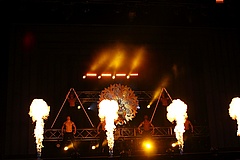 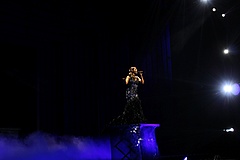 As a film, BODYGUARD was a real blockbuster in 1992. The story of the celebrated singer Rachel Marron, who falls in love with her bodyguard Frank Farmer, became a worldwide success not only because of the cast with Whitney Houston and Kevin Costner. The music also played a crucial role. The mega ballad "I will always love you" became a global number 1 hit and the film's soundtrack sold over 44 million copies. Thus, this film was predestined to conquer the world's stages as a musical. And indeed, BODYGUARD - THE MUSICAL celebrated its premiere in London almost exactly twenty years after the cinema success and finally also came to Cologne in 2015.

Now this successful musical version is also going on tour in Germany for the first time, making a stop in Frankfurt from 18 December to 11 January 2020. In the Alte Oper, the audience will be treated not only to the well-known songs from the soundtrack, but also to many other great hits by Whitney Houston. These were very well incorporated into the script of the musical adapted by Oscar winner Alexander Dinalaris. In exchange, some aspects of the story have been changed, though of course some important key moments have been retained.

One big difference between the film and the musical is the fact that in the musical it is allowed to have a laugh. For example, there's a scene in a karaoke bar that's really really funny, providing a pleasant counterbalance to the plot line about Rachel's stalker. Overall, the story is rather simple in both versions. It's a very conventional thriller plot that works so well because it's embedded in a great romance and spiced up with great songs. And it's precisely this aspect that admittedly comes across even more strongly in the musical.

There's also a really great set design, which plays with lighting effects and video projections as well as with sliding elements that give the impression that an image is fading up or down. Very, very successful. This also applies to the wardrobe - especially the numerous costumes Rachel has to slip into during the story - the excellent live band and, of course, the actors. That they were honoured with standing ovations and minutes of applause at the premiere in Frankfurt is more than deserved. Whitney Houston was an exceptional singer whose unique voice made her songs so unforgettable. The fact that the creators managed to find actresses not only for Rachel Marron, but also for her sister Nikki, who can interpret these songs with incredible power, warmth and passion, makes this musical an absolutely worthy tribute to the soul diva who died much too soon.

Romanticism, humor, suspense, convincing actors, strong voices and songs like "One moment in time", "All at once", "Run to you", "How will i know" or "I wanna dance with somebody" guarantee a first-class musical evening. And at the latest when "I will always love you" rings through the Alte Oper at the finale, collective goosebumps are guaranteed. You really shouldn't miss this!

More info on the musical can also be found at: https://www.bodyguard-musical.de