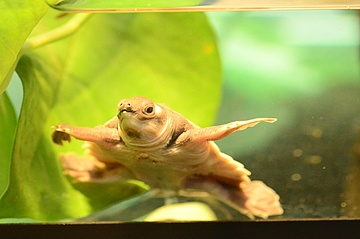 On July 4, four hatchlings hatched in the Papua soft-shelled turtles in the Exotarium. This is only the second successful breeding of the endangered species in Germany ever. The young ones will spend the next months in the breeding station. There they can be well observed by the visitors.

"I was delighted to hear the news from the zoo that the Frankfurt Papua soft-shelled turtles have had their first offspring. This is something special: worldwide, offspring of this species have only been confirmed in five husbandries," said Dr. Ina Hartwig, Head of Department for Culture and Science and patron of the Frankfurt Zoo Foundation.

"Little is known about the reproduction of Papuan soft-shelled turtles. The conditions that lead to successful egg laying and hatching have hardly been researched. Therefore, we cannot say with certainty why our animals have bred successfully at this particular time - after all, they have been living together in the same enclosure for 18 years. That's the exciting thing about working in a scientifically managed zoo - nature gives us puzzles and we get to explore them," says zoo director Professor Dr Manfred Niekisch.

Three adult animals live at Frankfurt Zoo. The male came to Frankfurt from Rotterdam in 1999 and is at least 39 years old. The females have lived at the zoo since the mid-1990s. They can be seen in the crocodile enclosure in the Exotarium. The adult animals can be kept with the freshwater crocodiles without any problems. The turtles do not provide food for them. To protect the hatchlings, they were moved to the nursery as a precaution.

The Papuan soft-shelled turtle (Carettochelys insculpta) is found in northern Australia and Papua New Guinea. There it lives in large rivers and estuaries. It is the only living species of the family Carettochelyidae. According to the Red List of the World Conservation Union IUCN, the species is considered endangered. In Papua New Guinea both the animals and their eggs are considered a delicacy, in Australia the species suffers from habitat loss