Great joy at Frankfurt Zoo: After almost 20 years, fossas have a new offspring
from FFM Aktuell 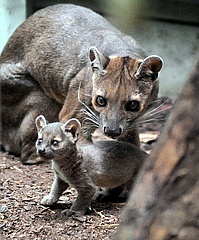 (ffm) The elegant fossas are not very common in zoos. In the cat jungle of the Frankfurt Zoo there are now three of the only rare predators from Magadascar to see. Sissi and Bohara had a kitten on September 7.

In Frankfurt they live in the cat jungle and are sometimes called ferrets - but fossas are not cats at all. Cryptoprocta ferox belongs to the "felines" and is the largest predator of Madagascar. The territorial loners inhabit two separate territories, i.e. enclosures, at Frankfurt Zoo outside the mating season. During the mating season, Sissi, born in 2013, and Bohara, born in 2009, get along extremely well. The beautiful result: on September 7, the female gave birth to a cub - her first ever.

From the beginning, Sissi has taken care of the little one and looked after it well. This included moving it to different dens. Fossas also exhibit this typical behavior at the zoo when they have the opportunity. Changing locations every four weeks or so helps keep the young animal's exposure to ectoparasites to a minimum.

For four years, Sissi and Bohara have been living together at Frankfurt Zoo, but only now has it worked out with offspring. The reason for this is in all likelihood a change in animal management. During the mating season, both are together during the day, at night they are separated. In order to offer them more variety, the facilities for the night hours were swapped in the past. For several months now, Sissi and Bohara have remained in their ancestral enclosures at night, where they know their way around. With the fossas, the female determines the mating place. An important criterion here is that she must be able to hold on tightly, because the mating act - which usually takes place on a tree - takes a very long time. This summer, Sissi chose her favourite spot in her familiar territory for mating. And sure enough, it worked.

"Both the provision of multiple dens and the change in enclosure management show the importance of gaining knowledge about the animals' natural behaviour and applying it to the zoo. It is often small changes that increase well-being and, as in this example, lead to successful breeding of endangered species," explains Zoo Director Miguel Casares.

The last fossa birth was announced by Frankfurt Zoo in 1999. Apart from Frankfurt, the species is only kept in three other zoos in Germany.

On Thursday, November 8, the young animal was examined by zoo veterinarian Nicole Schauerte. The little male is healthy and lively, weighing 556 grams at two months now. During the examination, the cub also received its chip - a kind of "identity card" with all the important data.

As is so often the case, fossas are also threatened in their ancestral range by the activities of humans. They are losing their habitat due to urban sprawl and conversion of rainforests and dry forests to farmland. The World Conservation Organization (IUCN) currently estimates the population of adult animals at around 2600 individuals