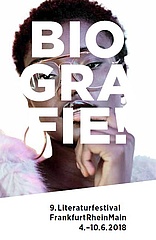 Organizers draw an extremely positive balance after the literature festival

(ffm) For the crowning conclusion of literaTurm 2018 read on Sunday evening, 10. June, the 92-year-old Martin Walser and his son Jakob Augstein read from the autobiographical volume of conversations "Das Leben wortwörtlich", in which Walser confesses to his own life as the material of his writing: "Every novel is an autobiography, a self-portrait of the author at the time of writing."

Autobiographically based novels formed one of the four pillars of the festival programme, which was themed "Biography". The other three were composed of classic biographies, autobiographies, and novels recounting the lives of real artists. This mixture of different genres resulted from the theme, which this year was dedicated to biographical storytelling. Thus, the festival moved between fiction and reality. As a work commissioned by the festival, Büchner Prize winner Felicitas Hoppe and composer Iris ter Schiphorst developed an interplay of text and music, which was performed by the Ensemble Modern. This was the grand opening of the festival at the Dominican Monastery, which delighted the audience.

Six festival days followed, with a total of 39 events exploring the theme of "biography". In addition to the opening, the readings with Lamya Kaddor, David Schalko, Patrick Bahners, Karl Heinz Bohrer, Eva Demski, Durs Grünbein, Emmanuelle Loyer, Ijoma Mangold, Ulrike Edschmid on Susan Sontag and Peter Kurzeck as well as the closing evening with Martin Walser were sold out. With Marcel Beyer, Durs Grünbein, Felicitas Hoppe and Josef Winkler alone, four Büchner Prize winners took part. Most of the readings took place on the top floors of Frankfurt's skyscrapers around the Alte Oper. There were also numerous events in the region, which this year were better attended than ever before. A total of 3,500 visitors were counted during the festival.

literaTurm has once again proven that a conceptually ambitious programme is appreciated by Frankfurt as a city of books and literature and by the population in the entire Rhine-Main region. Ina Hartwig, head of the cultural department of the city of Frankfurt, emphasised: "I am particularly pleased with the great response from the public because literaTurm, as a curated concept festival, offers the citizens sophisticated events and has a clear objective in terms of content and a programme geared to this. I am also pleased that a very mixed audience came to the readings."

The director of the festival, Sonja Vandenrath, who conceived the programme, also drew a very good balance in terms of content: "The festival has brought a topic that is virulent in literature and science to the attention of a broad public. From the readings and conversations, I came to the conclusion that today's biographical narrative stages the fictionality of all identity without costing it the appearance of truth."

literaTurm is organized by the Cultural Office of the City of Frankfurt am Main and takes place every two years. This year the regional expansion of the festival was supported by the Kulturfonds Rhein-Main. Media partners were hr2-kultur, the Frankfurter Rundschau and the Journal Frankfurt. The next edition of the literature festival will take place in June 2020.