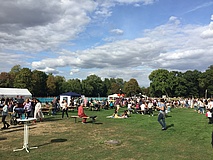 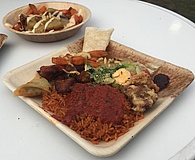 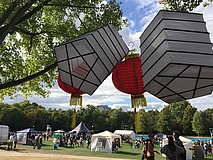 Last weekend, the Asian Food Festival celebrated its premiere in Frankfurt. For two days, the Brentanobad was transformed into a pleasure and experience mile, which allowed visitors to immerse themselves in the cultural and culinary diversity of Asia. Not only did the weather cooperate, but organizer Sebastiao Pembele and his team were also thrilled with the response. Around 4,500 visitors attended the first Asian Food Festival, with Saturday in particular attracting a particularly large number of curious visitors to Rödelheim with sunshine and pleasant summer temperatures.

At various booths and food trucks, the hunger could be fed with delicacies from Thailand, India, China or the Philippines. Pork skewers with spicy BBQ marinade, rice noodle salad with beef or tofu, nasi goreng, chicken teriyaki, samosa, or even burritos and tacos from Filipino Ese were on the menu. Long lines quickly formed in front of some of the stalls and it even happened that the operators were completely sold out even before the festival ended. However, this did not dampen the cheerful mood on the festival grounds.

This was not only generated by the beautiful weather and the food. Also the stage program made sure that the visitors were well entertained. For example during the classes of the Indian yoga teacher Feroze Khahn, who with his disarming manner not only got the adults to join in with his yoga exercises. The little visitors were also enthusiastic before they went to the bouncy castle again. Master Wu from the Shaolin School Frankfurt also provided enthusiasm with his Kung Fu show and Tai Chi. A musical treat was provided on Sunday with the performance of Sandhy Sondoro, who hit his audience right in the heart in three languages (English, Indonesian and German).

All in all, one can speak of an absolutely successful premiere. And since it was impossible to try all the stands once around, one can hope that at the latest in the summer of 2019, a second edition of the culinary culture festival comes to Frankfurt. You can also find everything else at: <link https: www.facebook.com asian-culture-food-festival-540775449644621 _blank>Https://www.facebook.com/Asian-Culture-Food-Festival-540775449644621/