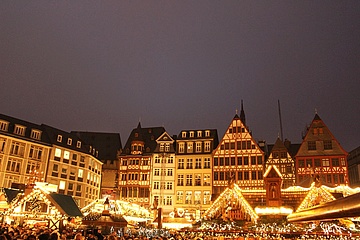 The online action initiated by Frankfurt-Tipp books over 100 merchants & showmen.

Single Christmas tree "Bertl", a gift from the GrÃ¶bminger Land in the Styrian holiday region Schladming-Dachstein, stands since the end of November on the RÃ¶merberg. In 2020, the Advent season will be a little different than usual: the festive switching on of the Christmas lights on the tree and the festive market hustle and bustle around it, which attracts many hundreds of thousands of people to Frankfurt's city centre every year, cannot take place due to Corona. Almost all other Christmas markets in Germany are suffering the same fate as the Frankfurt Christmas market this year. The cancellation hurts visitors, but especially carnies and traders, who lose important income as a result. And that's exactly where Frankfurt-Tipp wants to start with the 1st Virtual Christmas Market Frankfurt & Rhine-Main, which was launched in November as a Facebook group.

The team of the city portal is not concerned with transferring the special Christmas market feeling into the digital world. Rather, the virtual Christmas market is intended to offer traders a platform on which they can offer their goods despite the cancellation of the physical market. For visitors*, it's a nice way to support local merchants and manufactures and find lots of great gift ideas for the holidays.

The high response and continued interest from a wide variety of industries is particularly pleasing to the initiators. "We are very happy that so far more than 100 traders and showmen have already registered for our 1st Virtual Christmas Market Frankfurt & Rhine-Main and the associated Facebook group has more than 1,600 members", says BjÃ¶rn Fritsch, Marketing Director of Trifels Verlag. "The positive feedback shows us that even in these difficult times, in which we have to do without so much, it is possible to spread cohesion and hope with simple means."

The Frankfurt-Tipp team is particularly pleased with the diverse range of products to be discovered at the virtual Christmas market. Thus, in addition to traditional Christmas market stalls such as the "Nuss Michel", the "Black Forest House by the Fireplace" or the roasted almonds of M. Eiserloh, the Frankfurt Braumanufaktur BrauStil and the MaÃŸatelier Stephan GÃ¶rner are also part of the party. And even magician Nicolai Friedrich, world champion of mental magic, is represented with a stand at the
1st Virtual Christmas Market Frankfurt & Rhine-Main.

Whether handicrafts, decorative items, wine, handmade unique bags, greeting cards or delicacies from Tyrol - still until 31.12.2020 there is a lot to discover at this virtual marketplace.

The Frankfurt-Tipp team hopes that with this virtual Christmas market variant a small part can be contributed to make the current winter a little easier for the affected traders and showmen.

In addition to the marketplace, the large and small online visitors were and are also offered an atmospheric accompanying program together with regional partners from the cultural sector. Thus, in addition to the Santa Claus live stream of the Galli Theater Wiesbaden, among other things, a jazz concert of the duo Kapp & Chino was presented, the latter with the kind support of the Taunus Wunderland. A Christmas sing-along for young and old with Oliver Mager and delightful Hessian contemplation with Frankfurt's cult star BÃ¤ppi and his Crazy Christmas are also part of the programme. The previous offerings have already been streamed by more than 10,000 people.