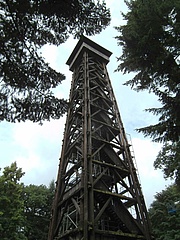 (kus) "I am proud of our citizens of Frankfurt. You have clearly surpassed the 100,000 euro mark with your donations for the reconstruction of the burnt Goethe Tower," Mayor Peter Feldmann announced on Thursday, December 7. At that time, a total of 123,448.18 euros was in the special accounts of Nassauische Sparkasse and Frankfurter Sparkasse.

The decisive factor for this was several large donations, including a donation of 10,000 euros from Nassauische Heimstätte (NH), which was handed over on Thursday, December 7, on the fringes of the NH supervisory board meeting. Mainova had also contributed 5,000 euros. In addition, the two savings banks are also among the generous donors. The bulk of the donations was provided by the total of 1056 individual donors, for example, a charity Christmas party on Wednesday, December 6, brought the donation amount of almost 1,000 euros.