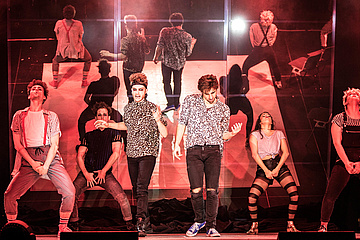 Where there is light, there is also shadow. Desiring to leave their dreary small-town life behind and break out, three friends are drawn out into the world. Each of the young men is in search of his own personal piece of happiness - and they all strike out on their own paths. With the musical "American Idiot", director Michael Mayer and frontman of the band Green Day, Billie Joe Armstrong, have created a work the likes of which the musical world has never seen before. Off-Musical Frankfurt brings "American Idiot" to Germany for the first time and presents the musical on eight dates at Frankfurt's Batschkapp starting January 17, 2018. The special feature: Here, the well-known Green Day songs will be heard in German for the first time.

Johnny burns to indulge in the hustle and bustle of a big city and live life intensely. But he gets more and more lost in a maelstrom of drugs. Will he realize in time that the drugs only rob him of the awareness to recognize what is really important? It is especially the quiet moments in which Philipp Büttner, who is also on stage as the first cast member of the Disney hit musical Aladdin in Hamburg, captivates the audience with his voice. His haunting lament over the shards of his Träumerei'n (Boulevard of Broken Dreams), his yearning confession of love "Wann darf ich Dir gesteh'n" (When may I confess to you) and the interpretation of the catchy song "Weck mich auf, wenn der Herbst beginnt" (Wake me up, when September ends) touch - and create a special intimacy.

Will (Dennis Hupka) also has big dreams and wants to turn his back on his buffer town. Fate, however, has other plans. Girlfriend Heather (Laura Friedrich Tejero) gets pregnant and so he has to become an adult sooner than he would like. But will he be able to withstand the pressure he's under?

The third of the bunch chooses a risky path. Tunny (Sebastian Smulders) enlists in the Army and serves in the Iraq war. He survives his deployment, but inside he's a broken man. Does a "Abgefahr'ne Frau" (Lena Weiss) help him get back on his feet?

The stage design is kept very simple. In combination with different lighting concepts, transparency and reflection, the viewer's gaze is thereby directed particularly precisely to the performers and the great compositions of Green Day, one of the world's most successful rock bands of the last 20 years, can really shine.

Winning a Grammy for best rock album, the studio album "American Idiot" has sold around 15 million copies to date. The musical adaptation played 422 times on Broadway in 2010-11 and won two Tony Awards, and the cast recording of the musical was also honored with a Grammy in the Best Musical Show Album category. The idea of hearing the band's hits in a German translation is bound to cause skepticism at first. However, the translations are really good. So the songs hit the listener once again on a whole new level, but still right to the heart.

In the end, the protagonists are looking for love and security above all; for something that resolves their inner contradictions and their brokenness. And by the time the curtain finally falls, they have matured the conciliatory insight that with a rucksack full of experiences it can feel good to return: to oneself, to one's homeland or to one's responsibilities. That carries over to the audience, too. American Idiot is an extraordinary and enriching musical experience.

To put together a mix of experienced musical performers and young talents - that was the goal of the young musical company Off-Musical Frankfurt at the audition for the German language premiere of American Idiot. Standing ovations and minutes of applause rewarded the great performance of the cast at the German premiere of the musical at Frankfurt's Batschkapp. As a thank you, they performed the song "Und tschüss!", the German version of the Green Day classic "Good Riddance - Time of your Life". A successful end of a beautiful evening.