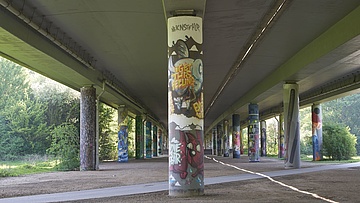 (ffm) 36 works of art on 36 pillars: In the Volkspark Niddatal there is a lot to see in the open-air gallery. On Sunday, August 12, Stefan Mohr, director of the project, will guide through the gallery and tell about its creation, the artists and their works of art. From 3pm onwards, citizens can immerse themselves in a colourful and fabulous world under the bridge of the A66 in the Volkspark Niddatal: green ghosts, pink panthers and colourful birds compete with funny painters, angelic doggies and fantastic landscapes.

The gallery features a colorful mix of graphic motifs as well as comic-book and natu-ralistic depictions. Places, motifs and scenes from the GrünGürtel are also included, including the Goetheturm, the Nidda and the GrünGürtel animal. Also to be discovered are typical Frankfurt tenants: the Grüne Soße, the Bembel and the Rindswurst.

The first artworks were created on the occasion of the GrünGürtel anniversary in 2016 and were then completed last year in a campaign with over 20 internationally active artists and Frankfurt youths. "In the past, people just wanted to walk or cycle through here really quickly. Now walkers or cyclists like to stop to look at the artworks. The awkward place under the motorway bridge has become a truly original open-air gallery in the GrünGürtel," said Head of the Environment Rosemarie Heilig at the opening. The municipal GrünGürtel project group, which commissioned the graffiti gallery, as well as the RhineMain Regional Park, which covered a large part of the costs, are also delighted.

The Graffiti Gallery in the GrünGürtel is best reached by taking the U7 to the "Große Nelkenstraße" station, then walking along the motorway embankment via the street Am Ellerfeld into the park until you reach the large motorway bridge. The location of the gallery is also shown on the GrünGürtel leisure map. The map can be ordered at <link>Umwelttelefon@stadt-frankfurt.de or <link http: www.grüngürtel.de _blank>

The tour on Sunday, August 12, 3 p.m., is open to anyone interested. Admission is free