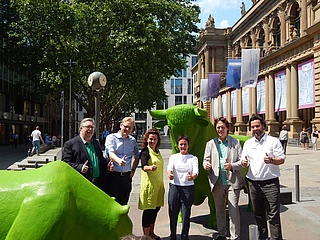 The signs are green! Bull and bear in front of the Frankfurt Stock Exchange were already dipped on Monday in the color of the sauce, around which everything will revolve in a few days. Because on Thursday, 6 June, the whole of Frankfurt will be under the sign of the green sauce. The "Green Sauce Day" will be held for the second time, and with it the world record attempt, which failed last year, to become the city in which the most portions of green sauce are eaten on one day. But it's also about bringing the city together over green sauce. And this idea was reason enough for the Frankfurt Stock Exchange and the Frankfurt Chamber of Commerce and Industry to participate in this year's Green Sauce Day with a special campaign.

This Frankfurt landmark was painted with a special paint that does not wash off, but can be easily peeled off. Next Saturday, the original state will be restored. Large banners with the seven herbs of the Green Sauce have also been hung along the facade of the stock exchange. This makes the square ideally prepared for the Green Lunch, which will be held here on Thursday. This is one of many great opportunities to enjoy the traditional Frankfurt dish in a wide range of variations. Whether classic, as a kebab, as ice cream or as a creppel, there are again quite a few tasty possibilities to take part in the world record attempt on Green Sauce Day. Therefore, initiator Maja Wolff is also sure: Even if the mark of 231,775 portions, which is cracked for the world record, should not be reached, the number of consumed portions will be extremely high.

Finally, there are also many great promotions, such as the Green Dinner on the banks of the Main. Also unusual actions like the 1st garbage can fashion show, with which Frankfurt's most beautiful garbage can is selected, will provide for large spectator interest. The trash can fashion show will begin at 4 p.m. on the Sportsmen's Mile on the Main Quay between Eiserner Steg and Untermainbrücke. The Antagon Theatre will present in a special way the barrels designed by day-care centres, schools, art clubs and social institutions. Presenter Timo Becker will lead through the programme. Following the show of the tons, there is a nice participatory action: the musician Sabine Fischmann will sing together with everyone the environmental song "Our Earth".

On the Römerberg is of course also served vigorously Grie Sooß, accompanied by an entertaining stage program. In addition to performances by Roy Hammer & the Pralin&eacute;es or Bäppi La Belle, who had already entertained the audience here last year despite the extreme heat in the best way, the Fraa Rauscher Song Contest (from 5 pm) is again on the program in 2019. One can be curious in which versions of the classic will be heard this year. And on the Roßmarkt, a cultural festival will be celebrated, where, in addition to music and dance, there will also be the dish of the day in sometimes very surprising variations.

Whoever wants to participate in the world record while shopping should stop by MyZeil. On the FOODTOPIA level of the shopping centre on the Zeil, 15,000 portions of green sauce will be distributed to visitors free of charge between 11am and 6pm. But don't forget to enter the code you'll be handed with the deliciousness online, so every serving will count towards the world record.

For all the other info on Thursday's highlights, participating locations and how to enter the code, visit: http://www.gruene-sosse-tag.de/