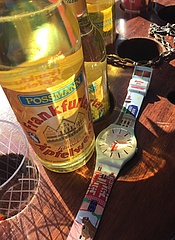 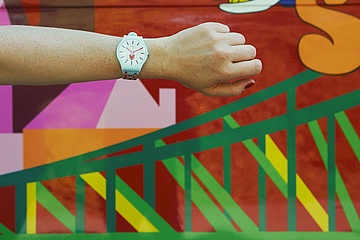 A ride on the Ebbelwei Express is actually always a special experience. But on Thursday afternoon there was something else to discover besides sightseeing and cider in the cult tram: The Swiss watch manufacturer SWATCH presented its latest watch from the coveted SWATCH Destination series in the moving location. After cities such as London, Bern, New York, Milan, Amsterdam and Tokyo, Frankfurt is now one of the cities to which a dedicated watch has been dedicated. After Munich, the Main metropolis is only the second city in Germany to receive this honour.

In the more than 35-year history of SWATCH, there have already been quite a few collections that quickly achieved cult status or were highly sought after due to a certain exclusivity. But the DESTINATION watches are also a real speciality for SWATCH. Because these watches can really only be bought in the cities to which they are dedicated. The Frankfurt watch, which goes by the name of "Ei Gude", is therefore only available exclusively at the Swatch Store (Zeil 123) and at Galeria Kaufhof (Zeil 116 - 126). Only there you can buy the beautiful UHr for 80 &euros.

The light blue bracelet is decorated with typical Frankfurt motifs such as the Römer, the Ginnheimer Spargel, the Alte Oper or Bull & Bear. And on the dial is the heraldic animal of the city, the eagle. A beautiful watch for all Frankfurt fans - whether native Frankfurtians, "Eineplackte" or tourists. The members of the SWATCH Club, who were allowed to ride on the Ebbelwei-Express during the presentation of the watch, were in any case already very enthusiastic about the good piece.