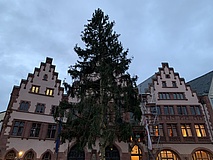 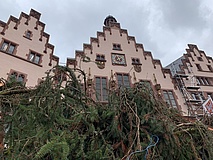 In Frankfurt the Christmas season was rung in today: The Frankfurt Christmas tree has been erected on Römerberg. As usual, the erection of the tree was accompanied by numerous onlookers. And yet there were also innovations this year: unlike previous trees, the 90-year-old, 31-metre-high spruce, which was christened "Gretel", did not have a particularly long journey behind it. It reached the Römer after only a short journey from the Spessart region, more precisely from a piece of forest in the municipality of Jossgrund, where the tree was felled a good week ago. Now "Gretel" will be festively decked out in the coming weeks before she can then shine in all her glory at the opening of the Christmas market on 22.11.

"Now the anticipation of the Christmas season really gets going," said Lord Mayor Peter Feldmann as he put up the tree. "As soon as the tree is on the Römerberg, the Christmas market is also not far away - and with it this sea of lights and smells that makes small and big hearts beat faster. Mine too, by the way." The Lord Mayor is very pleased that the Christmas Market will be held again. Because that, says Feldmann, is good for the soul, good for people!

The Managing Director of Tourismus+Congress GmbH Frankfurt am Main, Thomas Feda, has shown a lucky hand in the selection of the tree: "The tree was selected in the spirit of sustainable forestry, and this time does not come from far away, but from Jossgrund, only 60 kilometres away. After Christmas, 'Gretel' will become a seat in the country school home on the Wegscheide - that is also a contribution to sustainability."

"The big Christmas tree is the landmark of the Christmas season in Frankfurt and we are very happy that 'Gretel' does not have to stand lonely on the Römerberg like her predecessor this year, but will be framed by our Christmas market again", Feda was pleased.

For Feldmann, the fact that the erection of Frankfurt's Christmas tree is traditionally accompanied by plenty of nagging is simply part and parcel of this pre-Christmas event: "Controversial tree debates are part and parcel not far from St. Paul's Church. Is 'Gretel' beautiful or ugly, magnificent or plucked, too big, too small or just right? Every Frankfurt resident has an opinion about the tree."

But Feldmann said the old (tree) lady shouldn't take the criticism too much to heart: "At the latest, when all the lights are up and 'Gretel' lights up the Römerberg, all concerns will be forgotten." Yes, because then it is again "the most beautiful tree we've ever had!"

From Jossgrund in the Hessian Spessart

The tree was selected in consultation with Hessen Forst in the spirit of sustainable forestry.

After its time as a Christmas tree, the trunk will find a future as a seat at the climbing forest/sports field at the Frankfurter Schullandheim Wegscheide in Bad Orb.

Seller Matthias Krug is donating a large part of his proceeds to the Wunsch am Horizont association, which fulfils the last wishes of terminally ill people. Hessen Forst and other participants in the "Aktion Weihnachtsbaum" also donate a share of their proceeds to the association.