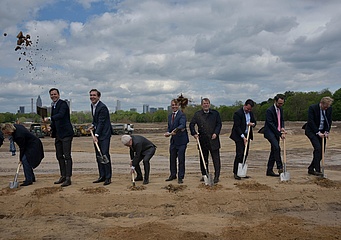 After a long back and forth, legal disputes, a referendum and other hurdles that had to be overcome, the time had actually come on Friday. With a ground-breaking ceremony, the German Football Association (DFB) gave the starting signal for the construction of the new site and its academy. According to the DFB, around 300 guests attended the ceremony on Friday, May 3. The association plans to house its administration and central sports base on the former site of the horse racing track in Niederrad. Following planning permission and the handover of the land by the City of Frankfurt, the ground-breaking ceremony marks the next step on the road to the new building. According to current planning, the costs for this will amount to a maximum of 150 million euros. And now that construction has begun, the work is scheduled for completion in 2021.

Mayor Peter Feldmann was delighted with the start of construction: "The DFB Academy increases the appeal of Frankfurt as a sports city in Germany. I am counting on valuable impulses for the people in the football clubs in the region. Club sport in particular is our number one integration engine." And Rainer Koch, First Vice President of the DFB, emphasises: "The construction of the new DFB and its academy is - alongside the organisation of the EURO 2024 in Germany - the central lighthouse project of our association. Both the top and the grassroots will benefit from this in equal measure. We will be able to bundle our competencies even more effectively in the future, respond to the increased tasks and offer service for the entire football family, in particular also for the regional and state associations, with new innovations."

"In addition to the professional work in the clubs' performance centres, the academy will make a further contribution to setting up German football in an innovative and future-oriented way. The construction of the new complex will create modern infrastructural conditions for developing specific content even more effectively and making knowledge available to all players in German football," says Reinhard Rauball, First Vice-President of the DFB.

DFB General Secretary Friedrich Curtius explains: "We are setting an important course for the future of our organisation. There is a spirit of optimism around the new building, and there is great anticipation for our new home. I also sense this in my conversations with the employees at the DFB. They are already shaping, thinking and living the new DFB. For me, this identification with the association and its development is a clear sign of how important and right the construction of the new building is."

"With the new DFB and its academy, we are creating a sporting home for our coaches, players and teams. There should be a constant flow of energy between theory and practice. We want to be a service provider and a source of inspiration for German football. The start of construction makes our vision even more tangible and visible," said Oliver Bierhoff, Director National Teams and Academy.