Groundbreaking for Jewish Academy in Frankfurt
from FFM Aktuell 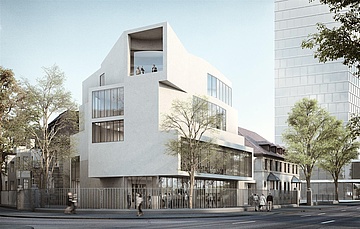 It is to become a place of encounter, tolerance and tradition. In any case, however, the Jewish Academy in Frankfurt will be a project unique in Germany. The house is to continue the tradition of the Jewish Lehrhaus, whose closure was forced by the Nazi dictatorship - and give intellectual Jewish life a new home.

"The Jewish Teaching House, founded in 1920, was much more than a religiously oriented institution," Mayor Peter Feldmann said at last week's groundbreaking ceremony. The ceremony took place on the future site of the academy. In 2023, the house at the Senckenberganlage should be completed. But just under two and a half years beforehand, the interest was already enormous. In addition to representatives of the press, Feldmann was joined by Josef Schuster, President of the Central Council of Jews in Germany, Frankfurt's Mayor and Head of the Church Uwe Becker, Hesse's Prime Minister Volker Bouffier and, representing Federal Interior Minister Horst Seehofer, State Secretary Markus Kerber.

In his address, the Lord Mayor looked to the future, but also to the past: "Even then, it was about creating meaning, about a Jewish culture that unites tradition and the present in its dynamics," Feldmann said. "It was what today is called a think tank. Intellectual heavyweights like Martin Buber, Leo Löwenthal, Bertha Pappenheim or Siegfried Kracauer lectured here. The fact that the Central Council of Jews is building on this proud tradition with the Jewish Academy is a great gain for intellectual life in Germany. This house will be the central anchor of the Jewish perspective. It will enrich social discourse, making it more diverse and multi-layered. We are proud that this house will be located in our home city of Frankfurt - surely the most Jewish city in Germany to date."

"I am very pleased that the implementation of the Jewish Academy is taking more and more shape and that the constructional starting signal is now being given. In this way, Frankfurt is tying in all the more with its historical significance as the intellectual centre of Jewish life in the German-speaking region of Europe. The Jewish Academy will make the breadth of a living religion accessible to an interested public, demonstrate the Jewish perspective on the development of society and thus enrich and help shape religious, cultural and social life in Frankfurt am Main, Hesse and Germany as a whole. Especially in a time of diverse upheavals, this special Jewish think tank in Germany's most Jewish city can become a very special place for discourse on the future of our colorful and diverse society," said Uwe Becker.

The Head of the Department for Culture and Science, Ina Hartwig, added: "With the Jewish Academy, another intellectual center is being created in Frankfurt that is explicitly dedicated to promoting plurality and its acceptance through political education. This is an important and topical task for our modern society. The Jewish Academy will enrich the discourse landscape on culture, politics, democracy, culture of remembrance and much more in Frankfurt, Germany and worldwide with Jewish perspectives. I am both proud and grateful that the Jewish Academy is being built here in Frankfurt am Main."

The Jewish Academy building was designed by Frankfurt architect Zvonko Turkali. The total cost of the project is set at 34.5 million euros, which will be covered by the federal government, the state of Hesse, the city of Frankfurt and the Central Council of Jews. The Jewish Academy is scheduled to begin operations in 2024.

The Jewish Academy is in the tradition of the Jewish Teaching House, founded in the 1920s and led in Frankfurt by Franz Rosenzweig. In the Academy, important public discourses are to be taken up and enriched by the Jewish perspective. In this way, the Jewish Academy aims to make a contribution to increasing acceptance for religious and cultural plurality in Germany.